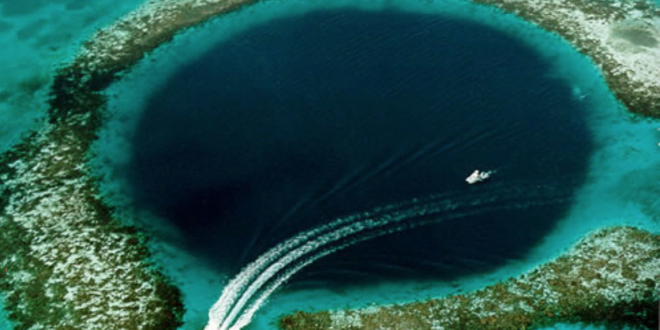 The Importance of Blue Holes

Just as landscapes are covered with mountains, canyons, and valleys, the geography of the ocean is anything but constant. One of the oceanic features undergoing research are blue holes: massive underwater sinkholes or caves. From above, they look like spots of dark blue, contrasting with the surrounding water.

Most blue holes were formed on land during the the last ice age when limestone eroded, forming large caverns. The roofs of the caverns collapsed as groundwater seeped in over time. Sea levels were hundreds of feet lower during the ice age, but once ice melted and sea levels rose, water flooded in to form the deep underwater caverns that now exist.

Water inside blue holes remain completely still because there is no current, and their walls protect coral and other organisms living inside.

While blue holes are known for their beauty and are attractions for divers, they are also vital for climate research. Blue holes were featured in the National Geographic series “Years of Living Dangerously” in 2016, when scientists and actors Ian Somerhalder and Nikki Reed explored a blue hole in the Bahamas. In addition to collecting core samples with their ship Alucia, they traveled into a blue hole with two submarines. To collect cores, the researchers placed long tubes made out of metal and plastic into the blue hole, which takes an hour and a half, according to an article by Oceanus Magazine. The tubes can be 15 meters long, or 50 feet. Putting the length of the tubes into perspective, the Belize Blue Hole is 407 feet deep with a radius of 1,000 feet.

As Oceanus Magazine describes, the process is somewhat like coring an apple with an apple corer: the long tube is inserted into the blue hole’s sediment, then carefully drawn upward, full of different sediment layers. The tube may break and falling into the blue hole, where it will remain forever.

Looking at the sediment layers from core tubes offers valuable insight into climate and ocean history. Blue holes are “time capsules for the ocean,” according marine biologist Johnny Gaskell in an article by National Geographic. The holes contain crucial information that allows scientists to examine the history of storms, as scientists identify trends by looking at the different layers, with thicker layers indicating major storms.

The difference between atmospheric conditions and sea level temperatures provides energy to hurricanes. Shifting sea temperatures can contribute to hurricanes, just as history suggests that the East Coast experienced hurricanes with greater intensity in the 1500s because of changes in temperature.

“This East Coast ocean warming trend 500 years ago echoes a similar warming trend today,” David Levin reports for the Oceanus Magazine. “Sea surface temperatures along the Eastern Seaboard now have already passed the level they reached in the 1500s, however, and most global climate models suggest that they’ll continue to climb.”

While more research is necessary, as ocean temperatures increase, the intensity and frequency of hurricanes may rise. It’s crucial to further investigate blue holes for a more in-depth understanding of the relationship between temperature and hurricanes, connected to climate change and storm severity.