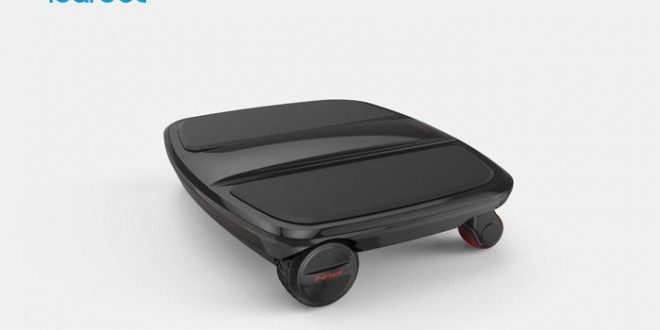 The 2016 International Consumer Electronics Show (CES) was held in Las Vegas from Jan 6-9, 2016. More than 4000 companies from all over the world attended this show, with hundreds of thousands of new products to display. Today I would like to introduce a product designed by a Chinese company.

F-wheel, a company based in China brought its new product named iCarbot to the CES. Wei Li, 27-year old CEO of F-Wheel explained the meaning of iCarbot. According to him, “i” refers to internet, “car” means moving, and “bot” means robot. It is a mini car robot with artificial intelligence technology and internet function. The iCarbot is a 4 wheeled electric scooter made with carbon fiber, which makes the robot lightweight and solidly built. Its weight is only 3.4kg, about 8lb, and this product is the lightest people mover ever known in the world. It has 500 watts of power and is 383x310x92mm in size. Charge time is 2.4 hours, the max speed can reach to 12 km/hour. It has Bluetooth access and can be controlled by the corresponding cell phone app.

Previous Another Mosquito Issue…
Next The Rise of Single-Gender Schools