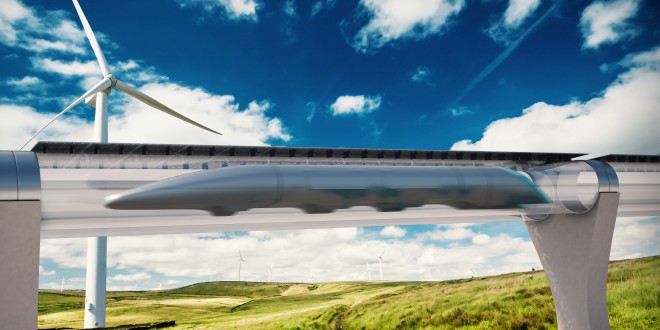 Almost a year after Elon Musk, chief executive of Tesla Motors (TSLA) and SpaceX, first floated the idea of a superfast mode of transportation, he has finally revealed the details: a solar-powered, city-to-city elevated transit system that could take passengers and cars from Los Angeles to San Francisco in 30 minutes.The Hyperloop, as he calls it, immediately poses a challenge to California’s $70 billion high-speed train that has been knocked by Musk and others as too expensive, too slow, and too impractical.

In Musk’s vision, the Hyperloop would transport people using aluminum pods enclosed inside of steel tubes. He describes the design as looking like a shotgun with the tubes running side by side for most of the journey and closing the loop at either end. These tubes would be mounted on columns 50 to 100 yards apart, and the pods inside would travel up to 800 miles per hour. Some of this Musk has hinted at before; he now adds that pods could ferry cars as well as people. “You just drive on, and the pod departs,” Musk told Bloomberg Businessweek in his first interview about the Hyperloop.

Musk thinks the Hyperloop would avoid many of the land issues because it’s elevated. Farmers would not have their land blocked by train tracks but could instead access their land between the columns. Musk figures the Hyperloop could be built for $6 billion with people-only pods, or $10 billion for the larger pods capable of holding people and cars. All together, his alternative would be four times as fast as California’s proposed train, at one-10th the cost. Tickets, Musk says, would be “much cheaper” than a plane ride.

As for safety? Musk has heard of it. “There’s an emergency brake,” he says. “Generally, though, the safe distance between the pods would be about 5 miles, so you could have about 70 pods between Los Angeles and San Francisco that leave every 30 seconds. It’s like getting a ride on Space Mountain at Disneyland.” Musk imagines that riding on the Hyperloop would be quite pleasant. “It would have less lateral acceleration—which is what tends to make people feel motion sick—than a subway ride, as the pod banks against the tube like an airplane,” he says. The Hyperloop was designed to link cities less than 1,000 miles apart that have high amounts of traffic between them, Musk says. Under 1,000 miles, the Hyperloop could have a nice edge over planes, which need a lot of time to take off and land. Overall, it would make transportation between big cities faster than ever.