Home / Health / The Future of Meat 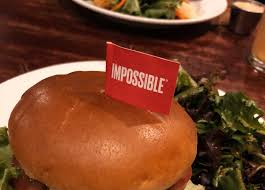 The Future of Meat

Vegetarianism and veganism have become dieting methods that have grown at a staggering pace in the past years. Plant-based dieting habits have been researched extensively recently, and studies have shown that meatless eating may have numerous benefits to the world and human health. Some vegetarians and vegans substitute the savory taste of a steak or burger with plant-based alternatives, which not only reduce saturated fat but also increase fiber and vitamin content in each meal. These changes may lead to a decreased risk of diabetes, heart disease, and cancer. Another reason for choosing plant-proteins is that they require fewer resources to cultivate than raising animals.

Using vegetarian substitutes for meat has been catching on throughout the world. Demand for meat-free foods increased by 987% in 2017, and becoming vegan was the most popular food trend in 2018. From 1993 to 2014, the amount of vegan restaurants in the U.S. has increased from 55 to a startling 485 and is continuing to rise at a rapid pace. The most surprising change in favor of plant-protein has occurred recently when massively popular fast-food chain Burger King announced that they would be introducing a new version of their popular meal, the Impossible Whopper. The composition of this burger patty is entirely made of plant-based alternatives for meat and is developed by a new startup called Impossible Foods. Other fast-food chains such as Carl’s Jr. and White Castle have also made meatless options a part of their menu.

Meat may be irreplaceable for most people, but occasionally substituting meat for vegetarian options is a more viable goal. The switch towards plant-based proteins can be even done at home. A popular method of replicating pulled pork is to pull jackfruit and add it to barbeque sauce. Making a patty that has the right consistency will also help with its edibility; a well-known way to do so is mixing quinoa and mashed beans to make hamburger meat, or shred cauliflower to become a chicken substitute. Eating meat in moderation has been shown to be beneficial for health, so partaking in meals that limit meat may be beneficial in the long run.

Previous Florida Man Killed by Own Cassowary
Next Green Deal: Yes or No?