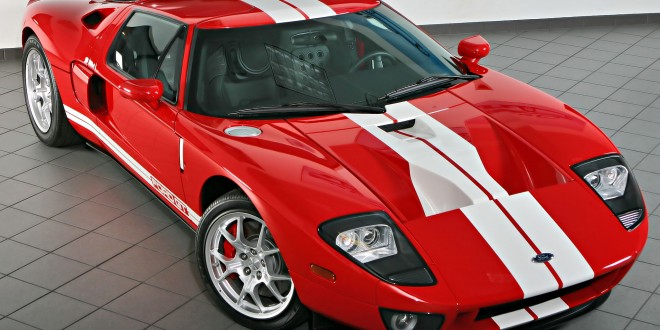 The Ford GT is a Sports car manufactured by Ford Motor Company. It was produced from 2005-2006, and is one of the most loved sports cars to this day.  When first released, demand outpaced supply.

A total of only 4,038 of these cars were made. Average sales went up to $150,000, and afterwards, it was sold for up to $550,000 at auctions. The Ford GT featured new unique bits of tech, including superplastic-formed frame, aluminum body panels, one-piece carbon-fiber inner panels, and more. The engine was a 5.4 L V8 engine, made of aluminum with a Lysholm supercharger. It had 6-speed manual transmission, and was assembled in Michigan, United States. It was 182 inches long, 76.9 inches wide, and 44.3 inches high.

For hard stats, the 0.60 mph time was 3.5 seconds. Top speed was limited to 205 mph, though it could have gone faster if it were not for safety concerns. Its average fuel consumption was 14 mpg, which is obviously pretty bad, but not surprising considering its such a sporty car. In fact, its was awarded the “Gas guzzler of the year” award by Top Gear.

It was also used in races, mostly modified like crazy but having the same frame. Overall, the Ford GT was a success of a car, and one of the most iconic sports cars in America. Ever since it’s release, this has been many many people’s dream car. It is something to work towards.

Impressive stories about the Ford GT also surfaced, and a modified version set a record of 267 miles per hour on a mile long strip. This shows how strong the design of the GT is, and how much potential it has. What is quite funny about this car is that because it is so highly valued and loved, a Ford GT getting wrecked is tragic news.

The car is incredibly rare, thus the ones that remain are treasured. Personally, I love the car because it looks absolutely amazing to me. I’m pretty sure most other people can relate, not to mention the engine sounds like a beast. Unfortunately, I’ve never seen one in real life. It would be a dream come true to set my eyes on one, and I hope I have the opportunity to do so in the near future.

Thanks to motophilia.com for the image.

Previous The Parent’s Perspective: Enjoying Life with a High Schooler
Next Does Class Size Matter?