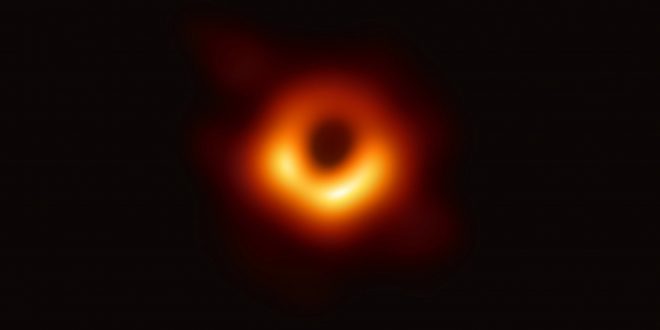 The Black Hole Picture – and the Story Behind It

Weeks ago a ring-like picture rocked the entire scientific community. Astronomy researchers and fans were celebrating the first ever picture taken for a black hole. The stunning picture shows the shadow of the supermassive black hole in the center of Messier 87 (M87), an elliptical galaxy some 55 million light-years from Earth. This black hole is 6.5 billion times the mass of the Sun. Black holes are made up of huge amounts of matter squeezed into a small area, according to NASA, creating a massive gravitational field which draws in everything around it, including light. As called “black hole”, it is not visible to an eye or any optical telescope since no light escapes from it. So how did we capture a picture of the black hole?

Well we didn’t actually, because what we caught was the outline. Material accumulates around black holes, is heated to billions of degrees and reaches nearly the speed of light. Light bends around the gravity of the black hole, which creates the photon ring seen in the image. The black hole has a ring-like structure and a shadow, which is represented by a dark central region. Catching its shadow involved eight ground-based radio telescopes around the globe, operating together as if they were one telescope the size of our entire planet, the Event Horizon Telescope (EHT).

The locations of the EHT participating telescope

The EHT is a global network of telescopes that aims at imaging black holes. Hundreds of researchers have worked for more than a decade to capture the images we are seeing now. The project is named for the event horizon, the proposed boundary around a black hole that represents the point of no return where no light or radiation can escape.

In their attempt to capture an image of a black hole, scientists combined the power of eight radio telescopes around the world using Very-Long-Baseline-Interferometry, according to the European Southern Observatory, which is part of the EHT. This effectively creates a virtual telescope around the same size as the Earth itself. The telescopes involved in creating the global array included ALMA, APEX, the IRAM 30-meter telescope, the James Clerk Maxwell Telescope, the Large Millimeter Telescope Alfonso Serrano, the Submillimeter Array, the Submillimeter Telescope and the South Pole Telescope.

“This is a huge day in astrophysics,” said NSF Director France Córdova. “We’re seeing the unseeable. Black holes have sparked imaginations for decades. They have exotic properties and are mysterious to us. Yet with more observations like this one they are yielding their secrets. This is why NSF exists. We enable scientists and engineers to illuminate the unknown, to reveal the subtle and complex majesty of our universe.”

Previous Evidence Based Prosecution
Next Bedbugs