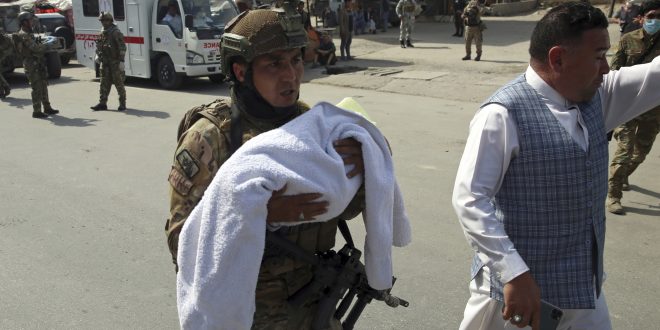 An Afghan security officer carries a baby after gunmen attacked a maternity hospital, in Kabul, Afghanistan, Tuesday, May 12, 2020. Gunmen stormed the hospital in the western part of Kabul on Tuesday, setting off a shootout with the police and killing several people. (AP Photo/Rahmat Gul)

On Tuesday, May 12th, 2020, Gunmen attacked a hospital in Kabul, Afghanistan, leaving 56 people dead and 100 others wounded. Attacks on the hospital’s maternity ward alone killed 24 people, including newborn children.

The Afghan government has blamed the Taliban, a common orchestrator of terror attacks in the region, for the attack on the hospital, but the Taliban has since denied accusations. It is unclear whether ISIS-affiliated militants could have been involved in the terrorist attack.

The attack proceeded when terrorists set off a bomb outside the hospital facility, and gunmen stormed the maternity ward, killing 24 nurses, pregnant women, and children.

The attack was condemned by the Human Rights Watch, which called it a “war crime”, and the United Nations, which demanded that the perpetrators of the attack “face justice”.

In the Afghan province of Nangarhar, around 100 miles east of Kabul, a suicide bombing had also occurred at the funeral of a local security commander, which was being attended by hundreds of people. At least 32 people were killed and more than 100 were injured. Nangarhar province used to be considered the hub of IS terrorists in Afghanistan and has been the site of U.S. military operations in the past, including the use of the MOAB bomb on caves used by insurgents.

Previous Adjusting Study Habits During Quarantine
Next The End of the Climate Crisis?