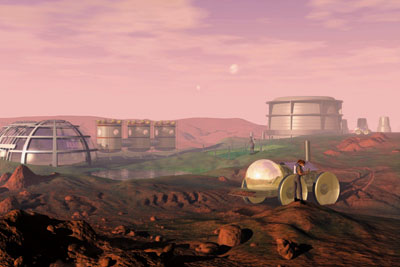 We’ve been imagining how to create a new Earth as long as we’ve known that ours was dying.

In the late 1930s, a few scientists and engineers posited that variations in climate were caused by humans—or more specifically, human-built systems powered by fossil fuels. If you think climate change is a contentious issue today, be glad you weren’t around back then. Attempting to prove that humans were actually changing the planet was a long, fraught road, as Spencer Weart explains in his 2011 book, The Discovery of Global Warming. “Hardly anyone imagined that human actions, so puny among the vast natural powers, could upset the balance that governed the whole,” he writes. “This view of Nature—suprahuman, benevolent, and inherently stable—lay deep in most human cultures.”

It may be a coincidence that the idea of terraforming emerged into popular culture within a few years of the emergence of climate change science. But even so, it’s interesting that humans only imagined having the power to shape other planets after they realized they might be shaping their own—however unwittingly.The relationship between Earthly concerns and planetary engineering has only grown more complicated since those early years.

In the 1990s, NASA trained its focus on Mars, sending the Pathfinder mission to the surface of the Red Planet. At the same time, scientists were studying how Martian geology could be altered for humans. In 1993, a NASA scientist named Chris McKay and Robert M. Zubrin of Pioneer Aeronautics published a seminal paper called Technological Requirements for Terraforming Mars that laid out a series of methods that could be used to make Mars habitable.

All involved making Mars warmer and wetter by creating an atmosphere, but the technical methods differed wildly: One imagined using mirrors orbiting Mars to blast its polar ice caps with sunlight, melting the ice and releasing the trapped carbon dioxide, which in turn would warm up Mars and create rainfall. Another imagined “diverting” asteroids—which contain frozen ammonia, an important ingredient in life—to hit Mars’ surface repeatedly