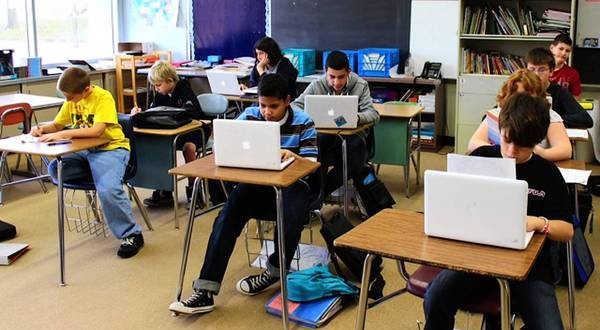 School, for a long period of time, has always been a relatively simple matter. Back when the world was slightly less developed, the topic of education was a more trivial one, and mostly disregarded. Recently, however, education has become a bigger importance, and our nation’s future, our hard-working and diligent students, was brought into the sight of the government. The rapid rate at which our technology is advancing only accelerates the onslaught of controversial educational subjects. Many schools are already experimenting with more contemporary technologies which include giving students free access to computers or iPads, but some schools still refuse these more current devices, saying that they are “too expensive,” or “too distracting to students.” To greater benefit our world’s next generation: our future Einsteins, future Washingtons, future Napoleons, we must all weigh the scale, considering the pros and cons, and decide one more optimal style of educating our pupils. Should schools switch to a more technology-based teaching method, risk the drawbacks but possibly achieve something greater, or should schools stick with the traditional system, the one that has benefited our world for so long?

According to Mr. Smith, an experienced teacher who has taught at Egan Junior High for over seventeen years, technology has both benefits and drawbacks. Mr. Smith teaches seventh grade world history, and all his classes use macbooks daily to do assignments on the internet, through Google Drive. To him, it reduces paper usage and saves trees, which is always a plus. It also allows students to submit feedback to him more accessibly through Google Mail, where students can email him questions that he can receive and reply to instantly, and another application, Edmodo, a popular social learning platform for teachers and students, in which he can set up polls to see what his students think about recent lessons. He admits that there will always be drawbacks such as distractions on the computer, with the entire internet at his students’ disposal. Because of this, some students may find it hard to focus in Mr. Smith’s computer based history class. It is a hard thing to measure and make a decision on, but, after weighing the scale of benefits and drawbacks, Mr. Smith decides that even if computers offer a minor diversion, the advantages slightly outweigh the disadvantages.

As stated by Ms. Haggin, another teacher at Egan Junior High, technology is also a hard subject matter to make a direct verdict on. Ms. Haggin teaches eighth grade U.S. history, where the class uses computers on certain occasions, and announcements, where the hard-working class uses computers and cameras on a day-to-day basis, writing the script and filming the anchormen and anchorwomen. The topic of technology in school is not a black and white type of issue that can be judged as right or wrong. It is a grayer subject, which contributes to its controversy. People must weigh the scale and consider both advantages and disadvantages of utilizing newer technology in a classroom environment. To Ms. Haggin, technology is more individualized than the traditional method of teaching, being more customized to the student and helping each student in the case that he or she falls behind. However, like Mr. Smith said, there are also drawbacks to the usage of technology. Ms. Haggin brings up the matter of managing such fragile equipment. Computers are expensive to maintain, being prone to malfunctioning, and they also have to be replaced every couple of years, due to the relatively short lifetime of a computer and the ridiculous speed that technology has been advancing. Because of the problem of expense, Ms. Haggin thinks that technology should not be used foolishly or meaninglessly. “We should not use technology just for technology’s sake, we should only use it if it is going to enhance the curriculum,” says Ms. Haggin. Ms. Haggin then wraps up her statement, declaring that technology has the potential to be the more useful educational method, but also has the potential to fall into bits and pieces if not used effectively.

In conclusion, education remains a challenging question to crack. Both the benefits and disadvantages are crystal clear, but it is up to everyone to try and weigh the scale in order to decide for themselves the answer to the ultimate controversial question. Should schools create a more technology-based curriculum, utilizing computers, iPads, and other electronics for students to employ while risking the chance that students become distracted or accidentally break a computer, or should schools continue to teach students with more traditional routines, and forsake all the customizability that comes along with contemporary technology?

Previous Interview With St. John – Wonder Teacher
Next A Glimpse of a Student’s Educational Life Today