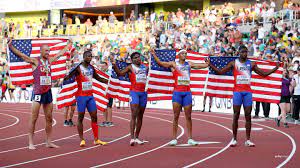 forever. Swimming, basketball, volleyball, you name it; we have consistently won medals. But sometimes overlooked is the track team. At the olympics, we were always outshined by Jamaican sprinters like Usain Bolt and Yohan Blake who have consistently shattered records. But with them gone, it is time to give the USA team the credit that they deserve.

At this years Track World Championships, we witnessed a display of skills that should not go unnoticed. Team USA put up numbers in the sprinting category that outshone any other country. The men’s 4 by 4, where each of the four runners will run one lap and pass the baton onto the next, were lead by 400 world champion Michael Norman as well as Elija Godwin, Bryce Deadmon, and Champion Allison who had an easy final leg. Womens 4 by 4 did exactly the same and even won the gold medal in the 4 by 1, a feat that team USA sadly could not accomplish as they came in second, only a few hundredths of a second behind Canada.

What was most exciting were the individual sprints. Two time olympic god medalist Sydney McLaughlin once again bested her personal record in the 400 meter hurdle for the 4th time in a year. Her earth shattering time of 50.68 could be seen on every social media app as they praised her for her outstanding effort. She said that she was “really happy that we got this opportunity here in front of this amazing crowd.” Still humble even when you have set a new World Record. Michael Norman who ran the normal 400 also outshone the competition.

The 100 and 200 meter dashes were both swept by Team USA men. Fred Kerley, Trayvon Bromell, and Bracy williams dominated throughout the season in the 100 and their talent and work showed in this final. The 200 was an outstanding showcase of talent with heavy favorite Noah Lyles winning gold. Bednarek, another USA runner came in second, and third was Erriyon Knighton. Knighton being only 18 years old has run the fastest time ever for his age. He even ran faster than Usain Bolt when they were the same age. Though he was a heavy favorite to win as well since he has been beating Noah Lyles’ time consistently, he sadly came in third, but this still shows his skill and talent at the top levels, and there are many more years to come for him.

Team USA needs to be recognized as a dominant force in the track world. During the Tokyo Olympics, not many USA runners even won a medal, but just a year after, they are dominating the track. 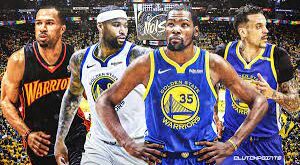