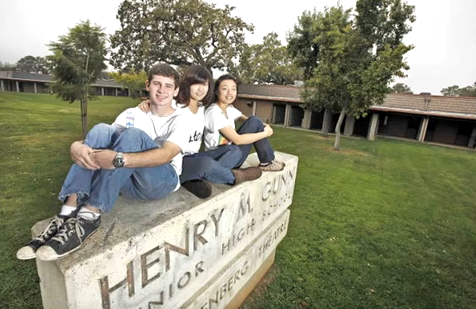 Tatiana Grossman is an outstanding student who I think has an interesting story and a giving personality. She is an inspiring pupil that loves and enjoys helping others.

Tatiana was chosen as an ABC7 Top Scholar in 2013. This is an award only given to seven high school senior students across the entire Bay Area. The students must have remarkable academic and extracurricular achievements. Each Top Scholar receives a $1000 scholarship. This is a huge honor is only given to the best of the best, and Tatiana definitely deserved it! Her exceptional accomplishments not only gave her this award but made her accepted into Stanford University, a very prestigious college.

Tatiana lives in Palo Alto and went to Henry M. Gunn High School. She will be studying computer science in the fall. Being a top science and math student, Tatiana was selected to participate in a summer program at M.I.T. She is even an accomplished philanthropist with a love for reading she shares with others. Tatiana is also a principal oboist for the Peninsula Youth Orchestra, playing beautiful music for everyone to hear. These activities and commitments are a good example of what other high school students should think about doing. If students follow Tatiana’s footsteps, they are on the right path. That path will surely lead to success, as long as they keep on going. Tatiana’s actions are a good motivation for other students who are a little lost in high school and college preparations.

Tatiana was also voted one of the most inspiring students in her senior class this year. This is because she donates books to Africa to help children that can’t afford books and do not know how to read. She found out at the age of 12 that three out of four children in Sub-Saharan Africa don’t know how to read, just because they don’t have books. She was shocked, as she grew up with plenty of books to read. That’s when she realized she could make a difference by helping these children.

She set up a book drive in front of her local library. She asked people to donate books and money to ship all the books to Africa. After a week, she had already collected about 3,500 books! It was enough to fill up three libraries there. This success made Tatiana picture doing much more, so she did. She created her own non-profit program called “Spread the Words”, andshe has stacks and stacks of books at home, waiting to be packed, shipped, and donated. There are about 4,000 books piled in her house, and they are boxed by volunteers for her program. She has made numerous shipments, and her group has collected more than $100,000 and has even created 20 libraries serving 22,000 people! This is such an amazing achievement that was very generous of Tatiana. This is such an incredible thing to do, and it shows that if you put your mind to something and really focus, you can do anything. Tatiana says that she wants to live a life of purpose, and she doesn’t feel like she is if she’s not helping others. This is a great example of what high school students can do to make a difference and give themselves a bright future.

Tatiana Grossman is wonderful person and role model. She has paved a path of greatness for others, and has done some marvelous, unbelievable things that should be a student’s goal.