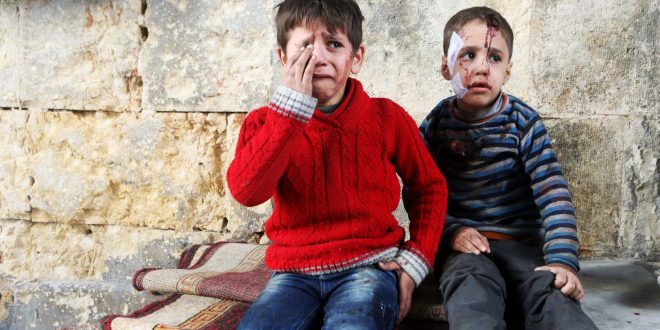 On April 8, 2018, at least 70 people have died in a suspected chemical attack in Douma, the last rebel-held town in Syria’s Eastern Ghouta. Volunteer rescue force the White Helmets tweeted graphic images showing several bodies in basements. It said the deaths were likely to rise. There has been no independent verification of the reports. Syria has called the allegations of a chemical attack a “fabrication.” So did its main ally Russia. The US state department said Russia with its “unwavering support” for Syria’s government was “ultimately bears responsibility” for the alleged attacks.

The responds from the Syrian government and Russia is that they were not involved in the attack and they accused rebels in Douma of fabricating the chemical attack claims in order to hinder the army’s advances and provoke international military intervention. Russian Foreign Minister Sergey Lavrov said Monday that his country had sent experts to Douma and that there was “no trace” of the use of chemical weapons there.

The Syrian War started on March 15, 2011 and is a war between the Syrian government Ba’ha, ISIS (Islamic State of Iraq and Syria), the opposing force, and Democratic Federation of Northern Syria and allies. The first chemical attack happened in August 2013, the rockets containing the nerve agent Sarin were fired at rebel-held areas of the Eastern Ghouta, killing hundreds of people. A United Nations mission confirmed the use of Sarin, but it was not asked to state who was responsible. Western powers said only Syrian government forces could have carried out the attack.

In April 2017, more than 80 people died in a Sarin attack on the opposition-held town of Khan Sheikhoun, and a joint inquiry by the UN and the Organization for the Prohibition of Chemical Weapons (OPCW) held the Syrian government responsible. Activists, medics and the US say Syrian government forces dropped bombs containing toxic chlorine gas on rebel-held towns in early 2018.

The joint UN-OPCW mission is investigating the reports. It previously found that government forces have used chlorine as a weapon at least three times during the seven-year civil war. However, the Syrian government has repeatedly denied ever having used chemical weapons. It maintains that its entire chemical arsenal has been destroyed.