Home / News / Stampede in Israel Crushes Over 45 to Death 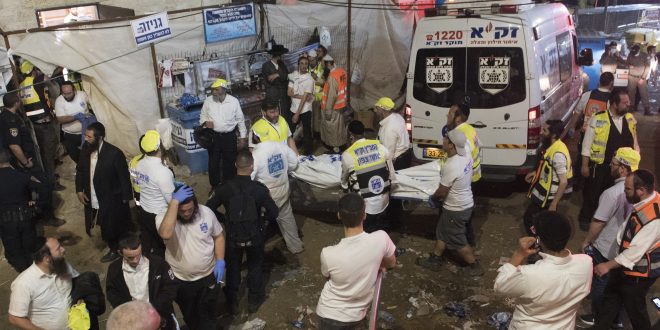 Israeli security officials and rescuers carry a body of a victim who died during a Lag Ba'Omer celebrations at Mt. Meron in northern Israel, Friday, April 30, 2021. More than 100 people were injured, dozens critically, in a stampede at a Jewish religious gathering in northern Israel attended by tens of thousands of people, Israel's main rescue service said early Friday. (AP Photo)

At least 45 people were crushed to death and more than 150 were injured, including many in critical condition, in a stampede after midnight on Thursday at a mass gathering to celebrate the Jewish holiday of Lag B’Omer at Mount Meron, according to medics.

Israeli Prime Minister Benjamin Netanyahu called the incident “a terrible disaster” and promised the people a thorough investigation, also declaring that Sunday would be a national day of mourning.

It was reported that a significant number of children were among the dead and injured. This incident is said to be the worst peacetime tragedy in modern Israeli history, with a higher death toll than the 44 lost during 2010 in the Mount Carmel forest fire.

Several hospitals opened hotlines for people to search for family and friends who may have been injured. Police could also be contacted. Efforts to identify all the victims and contact all the families were expected to be protracted, with some living overseas.

According to the Magen David Adom rescue service, the tragedy was caused by a crush and overcrowding. A police official stated that the incident took place where there was a slippery walkway, with a metal floor, where overcrowding was the most severe.

A large number of participants in the festival had been moving through the slippery and inclined walkway, which caused many to slip and fall on those below them, causing a crushing domino effect.

Organizers of the event and other officials had estimated that the amount of people participating were between 50,000 – 100,000.

Police shut down the entire event after the fatal incident and helped in evacuating all participants. Roadblocks were set up to prevent people from arriving at the scene. Police had also said that they were unable to enforce coronavirus restrictions at the site due to the large crowds.

Previous Is this the end for Serena Wiliams.
Next Coal and wet wood can’t be sold in England anymore