Home / Sports / Sports in the Movies: The Hustler 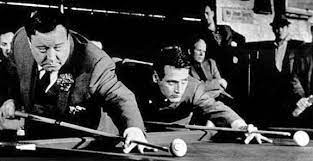 This month I will stretch the boundaries of sports to include billiards, particularly that subtype of billiards known as pocket billiards or pool. Pool is played with cue sticks and ceramic balls on a felt-covered, rectangular table with borders and six pockets (holes). Most versions of games of pool require that the cue stick hit the single white cue ball into one or more of the other 15 colored and numbered balls so that they go into a pocket. The version of pool most relevant to the film “The Hustler” is called straight pool, which requires that two players compete by calling the number of the ball and the pocket they will hit it into. A player may continue until he misses a shot or fowls out. When a final numbered ball is left on the table, all others are replaced and the play continues until a shot is missed. The opponent then takes over to do the same thing. This goes back and forth until a predetermined number of shots has been reached by on play, who is then the winner of that game. For example, if players are playing to 200, the winner must “sink” 200 balls first.  If you are still confused, take a look online at one of the many videos about this game or just watch The Hustler. That being said, the movie is not about pool. It is about our humanity, and pool is just a vehicle to help us understand it.

The Hustler is based on a 1959 Walter Tevis novel of the same name.  Tevis also wrote the novel, “The Queen’s Gambit”, recently made into an acclaimed 2020 miniseries. It has been said that some of our greatest authors write the same book over and over again is different guises. This seems true for these two books in that we see two emotionally damaged protagonists who seek emotional fulfilment through the games they play so brilliantly.  Some see Tevis exploring and exorcising his own “demons” through these stories.

The film, The Hustler, benefitted from director Robert Rossin, who understood that the story was not just about a battle over a pool game, but about the battle for the soul of the protagonist, Fast Eddie Felson. Refocusing the film away from the billiard competition and onto the relationship between Eddie and Sarah helps the audience see the cost of winning.  The director’s skill was also helped along by casting powerhouse actors such as Paul Newman, Jackie Gleason, Piper Laurie, and George C. Scott.  All of this talent and more came together to create a film that was nominated for eight academy awards (winning two). While pool is used to set the table, the feast is the emotions and motivations of the characters.