Home / Sports / Sports in the Movies: The Endless Summer 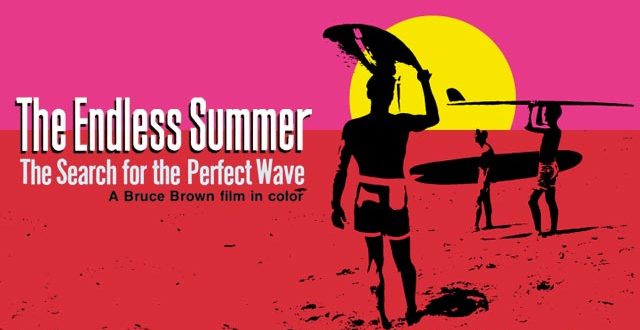 Sports in the Movies: The Endless Summer

Hawaiians are believed to have developed the modern form of surfing almost 1600 years ago. Europeans encountered surfing as early as 1767, when they met the Polynesian inhabitants of the Pacific islands, who would ride a shaped, wooden plank along the leading edge of a moving wave.  Learning from the Polynesians, James Matthias Jordon, Jr. brought surfing to America in 1912.  Surfing became a subculture sport in the United States until the 1960s, when The Beach Boys, The Safaris, and other California bands began to lyricize about it. While Hollywood did feature surfing in some teen movies, it wasn’t until Bruce Brown’s documentary, The Endless Summer, that the art, beauty, and joy of the sport became available for all to see.

Brown began surfing in the early 1950s and began filming surfing during his posting in Oahu, while in the Navy. He edited this early footage together and a surf shop back in California charged admission for customers to see it. This led to support for making better and higher quality surf films. With the encouragement and profits from these early films, he decided to take two years to make his ultimate surf movie, The Endless Summer, which follows two surfers, Mike Hynson and Robert August, as they search for the perfect wave on beaches around the world. The name comes from the idea that even when the water is too cold during California winters, there are beaches somewhere in the world that had perfect surfing conditions and they were going to find them. After editing and narrating the film himself and adding music by The Sandals, Brown began searching for a distributor. Hollywood often has difficulty understanding different and artistic films, so Brown was forced to prove his film’s worth by renting out theaters and selling out the seats himself. Ultimately, the movie was picked up a distributor known for supporting artistic films. In its 1966 release, the film generated five million dollars, an amazing 100 times more than its original cost to make.

The Endless Summer made a mark on surfing that was indelible. From Kansas to New York, the film brought eternal summer to a populous used to frigid winters. It popularized surfing in a way that had not happened before and it introduced little known surf spots in Tahiti, Australia, and South Africa. The world class surfing at Cape St. Francis, South Africa, was first introduced by this film. If the film has a flaw, it is probably the dated and somewhat hokey, narration done by Brown, but this is more than made up for by the beautiful images of surf and surfer that have engaged the world for almost six decades and served as a model for adventure sports films that came afterwards.