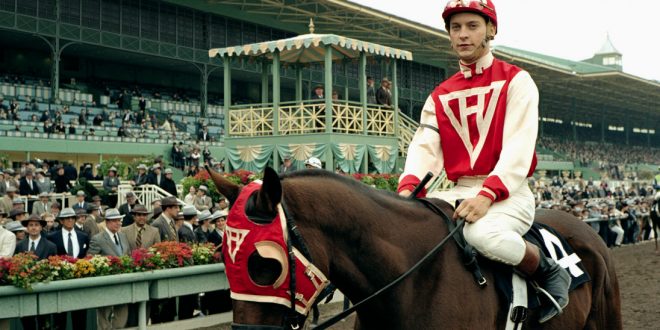 Sports in the Movies – Seabiscuit

Seabiscuit is the classic underdog story … except about a horse. While there have been many movies made about this particular race horse, I will focus on the 2003 film based on the well-researched, 1999 Laura Hillenbrand non-fiction book, Seabiscuit: An American Legend.  This film was nominated for 7 academy awards, but sadly took home none. Yet, it is an amazing true story about a horse that galvanized and uplifted a nation during the Great Depression.

Seabiscuit’s grandsire, Man o’ War, was considered as one of the great race horses of all time. Yet, Seabiscuit had a poor start to his racing career. He was undersized and appeared lazy to his first trainer.  He solidified this loser status by not winning any of his first 17 races. He did win a few races as a two-year-old, but no one paid him much attention and he became the joke of the horse stable. The film, however, is largely the story of the people who believed in him. Seabiscuit caught the attention of horse trainer, Tom Smith. Smith saw something in this odd horse and recommended him to entrepreneur, Charles Howard, who bought him for $8000. Smith also hired jockey Red Pollard to ride the horse and Pollard bonded with the horse and understood him like no other rider. After this team was assembled, Seabiscuit was moved to his new home in San Mateo, California and, under the care of these three men, began making history.

The three main human characters are played by a set of top-quality actors: Chris Cooper (Tom Smith), Jeff Bridges (Charles Howard), and Toby Maguire (Red Pollard). These actors did a great job of bringing out the back story of the people they portrayed, showing how each, like the horse, was broken in their way, and how the horse helped them as much as they helped him. Unfortunately, none was nominated for an academy award. While I am complaining about the academy, I was particularly surprised that Gary Ross was not nominated for his screenplay. He was able to take Hillenbrand’s well researched, yet journalistic book and create a STORY, one that captures the characters and the events so compellingly.  This movie helps us to believe that, under the right conditions and with the right team, we can all be more than we thought we could.