Home / Sports / Sports in the Movies: Pride of the Yankees 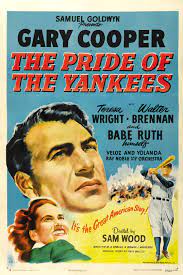 Sports in the Movies: Pride of the Yankees

This month in “Sports in the Movies”, we travel back to the early part of the twentieth century, when professional football was in its infancy and the NBA was years away. This was a time when professional baseball was THE sport of the masses. The sports sections of large daily newspapers were built around baseball and with the availability of inexpensive radios, baseball became a listening mainstay in most households.  From this time came legendary figures such as Babe Ruth, Rogers Hornsby and, of course, Lou Gehrig.

Today, Lou Gehrig is largely remembered in association with the disease that took his life in 1941, at the age of 37. In fact, most people are possibly more aware of “Lou Gehrig’s Disease” than they are of its clinical name, ALS (Amyotrophic lateral sclerosis), the progressive and incurable neurological disorder. Yet, in the 1920s and 1930s Gehrig represented the finest of baseball for millions of ball fans. He was handsome, humble, talented, and resilient.

The biopic, “Pride of the Yankees”, was released in 1942, one year after Lou Gehrig’s death and just three years after Lou Gehrig’s final ball game. By today’s standards, this movie may be considered saccharine or overly sentimental, but it was meant as more of a tribute to a man who meant so much to so many, rather than an authoritative, investigative film. The film highlights the finer qualities of Gehrig. It begins with a scene played out in many immigrant households. Gehrig’s poor immigrant parents are confronted with a young son who only wants to play baseball, while they envision a future in which he is a successful engineer. Out of respect for his mother, Gehrig agrees that he will study to be an engineer. Life takes a turn however and Gehrig finds that to help his family he must play ball. Lou is quiet and humble until he is on the ball field, where he becomes the “Iron Horse”, a powerful and resilient ball player. This resilience leads to an amazing 2,130 consecutive games played.

Gehrig is played by the cinematic giant, Gary Cooper. While Cooper, at 41 years old, is less than convincing as the young Columbia University student, he is well suited to the older Gehrig. It is, however, hard to imagine any other actor of that time playing the iconic ball player.  The screenplay was co-written by the amazing Herman Mankiewicz, also known for screenwriting “Citizen Kane”. The film was nominated for 11 Academy awards for 1943. Many consider it the one of best sports movies ever and as such it is worth your consideration.