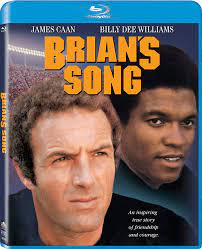 We begin what, I hope, will be a series of articles, called “Sports in the Movies”.  In the series, we will look at some of the great movies about sports. Some movies are just great fun and others are “great” because they are about more than the topic at hand. And so we begin.

While football has been tapped as the inspiration for many Hollywood motion pictures, for a certain generation, Brian’s Song was THE football movie. During a period of internal national strife over racial integration of schools, communities, and sports, Brian’s Song was a beacon of hope. It was a made-for-TV movie which aired on ABC fifty years ago, in 1971. Because of its TV status, you will not find it on the Oscar’s lists or on most lists of great “films” – see Rotten Tomato’s list of great sports films. It did not have much than generic television of production value, but what it did have was two fantastic young actors: James Caan (The Godfather) and Billy Dee Williams (Star Wars) portraying the true story of two Chicago Bears running backs who develop a bond that showed a generation that blacks and whites could love each other like brothers.

The movie is largely based on the recollections of football Hall of Famer, Gayle Sayers (Williams), about his few short years of friendship with fellow Chicago Bears running back, Brian Piccolo (Caan).  In an era when many teams segregated their black and white players in different hotels, the Bears started rooming players of the same position together. This led to the two running backs rooming together. The shy Sayers and the gregarious Piccolo turned what could have been a contentious competition for the running back position into a deep friendship. So much so, that the movie depicts Piccolo helping Sayers comeback from a debilitating knee injury. This film was so powerful that it is one of the few films ever to start out on television and then be released in theaters. It went on to a third life in many public schools, where it was shown to students as an example of how color should not stand in the way of friendship.

Sayers, who passed away in 2020, will be remembered for his amazing skill on the football field. Famed Bears head coach, Mike Ditka, called Sayer’s “The greatest player I’ve ever seen”.  Even though his career was cut short at the age of 28 by double knee injuries, he became the youngest inductee ever into the Pro-Football Hall of Fame. Piccolo, who died of cancer in 1970 will be remembered for his amazing spirit and “how he lived, how he did live”.