Home / Sports / Sports in the Movies: A League of Their Own 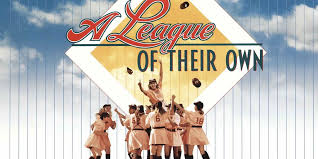 Sports in the Movies: A League of Their Own

World War II has begun for America. Able-bodied young men, including pro baseball players, take up arms to serve their country at war. With so many of baseball’s best players gone, and with the risk of shutting down Major League ball running high, the team owners decide to try something new – professional women’s baseball. A League of Their Own is a fictionalized account of the beginnings of the real-life All-American Girls Professional Baseball League.

The movie focuses on two sisters from Oregon and the team they join, called the Rockford Peaches. The older sister is a great ball player, but is content to stay at home waiting for her husband to return from war. The younger sister can’t wait to get out and experience the larger world.  Dottie (Geena Davis), the older, more talented, sister only allows herself to be recruited if her younger sibling, Kit (Lori Petty), can come along in a package deal.  The script ultimately does a great job of providing characterization for most of the team members, letting us see the varying personalities, strengths, and weaknesses of each. The main male role of the film is Coach Jimmy Dugan (Tom Hanks), a down on his luck and often drunk former ball player who initially treats the whole endeavor with a certain amount of disdain. The team of misfits must learn to work together if they are to become winners.

The movie is ably guided by fourth time director, Penny Marshall, who has a lot of experience with comedy and prior to this film, had just come off of a success with another great film, Awakenings, starring Robert De Niro and Robin Williams.  The casting for A League of Their Own is solid, with standout performances by Davis and Hanks. In a bit of stunt casting, the singer Madonna not only sings the movie’s theme song, “It Used to be my Playground”, but also takes on the role of promiscuous “All the Way” Mae Mordabito and does a great job at both.  We also see Rosie O’Donnell as third baseman Doris Murphy.

This 1992 movie is thought provoking and ahead of its time in discussing the changing role of women in sports and society. It has also given us such great quotes as “The hard is what makes it great” and of course, “There’s no crying in baseball”.  There is a lot of heart and humor and it is one of my top 20 films about sports.