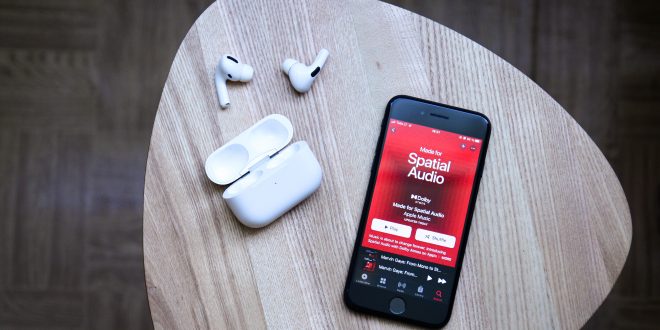 On June 7th, 2021, Apple released its latest software updates in WWDC 2021. Of the new features it announced, one that attracted the most attention was probably the spatial audio feature. It does sound really hi-tech. But, what exactly is spatial audio? How will it improve our listening experience, and what are the mechanisms behind it? Well, today we will be having an extensive discussion on this new technology.

Ideas similar to spatial audio, like surround sound systems, have been around for many years. However, they never received the attention that they deserved, mainly because of the marketing failure. However, this time, with Apple’s brand name in mind, spatial audio would sure become a hot topic for people to discuss.

Apple’s spatial audio creates a 360 surround sound effect by using a mix of gyroscopes and accelerometers built within their AirPods. These sensors inside the delicate headphones could track the movement of users’ head position, and adjust the sound source accordingly. For example, when one that has spatial audio turned on turns their head to the left, the sound would be louder in their right ear, as that would be the same case in real life.

The functions of the spatial audio system promise many immersive experiences. Watching movies could be a great way of utilizing this new feature, as the AirPod could mimic the speaker system from a movie theater, supplying sound from all sides of the “room.” Moreover, listening to music on supported platforms could be made more exciting, as if one listening with spatial audio is attending a live concert.

This technology is not made possible without the support of Dolby Atmos, which provides Apple with support in audio channels and professional sound distribution. To many people’s surprise, even Android phones are getting spatial audio support through updates enforced by Dolby Atmos (Of Course exclusive to the Apple Music App).

Currently, spatial audio is supported by only Apple devices. This includes the 3rd generation AirPods, AirPods Pros, and AirPods Max. To try this feature out, one should go to their iPhone/iPad’s control center, long-press the volume bar, and click spatial audio on the bottom. There are some tested rumors that Spotify is already capable of handling spatial audio. So, if you are feeling curious today and have the devices, go check it out!

Previous Phoenix Shooting
Next How Does Sleep Improve Your Life?