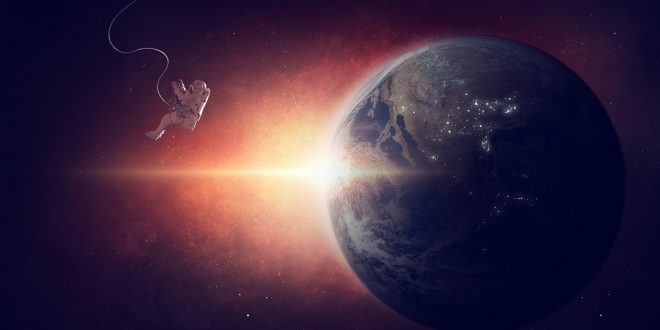 Space and our Bodies: Space Radiation

In addition to the vacuum effect, cramped quarters of a spaceship, confinement and isolation, and the altering gravity fields of planets, space radiation may be one of the most dangerous effects of space travel. While it does not seem like a big deal, space radiation of all forms has the potential to wipe out all life on Earth without proper preparations.

Luckily, humanity on Earth has been equipped with preparations that can typically prevent such occurrences of radiation. Earth has a natural shield in the form of our thick atmosphere and magnetic field. Visible light is reflected off clouds, while faster moving radiation is deflected by our powerful magnetic field. In 1976, during the peak of the space race, a solar flare occurred in the sun’s atmosphere, sending our radiation in all wavelengths. If the Apollo 16 mission have not returned to earth barely months before the undetectable event, they would have certainly perished from the exposure.

In space, even close to Earth’s atmosphere in low earth orbit (LEO), space radiation can be extremely dangerous for astronauts. Usually, the sun’s energy is harmless to us, but when a solar flare occurs, particles speed up and become lethal.

NASA plans to bring manned missions to Mars by the 2030s. However, the most troubling danger of the journey to and from Mars and the team’s mission on Mars lies in lack of protection against radiation, as Mars’s atmosphere is thin and its magnetic field is weak. NASA is currently working on a solution by studying heliophysics to see what they can do in future years.

Although large advancements in technology have been made against solar radiation, another source, galactic cosmic rays, or GCRs, come from all over the universe. Directed gamma radiation bursts can also hurt astronauts and is capable of wiping out life in even the most insulated planets. In the years to come, hopefully space travel and exploration can become just as safe as walking down the street, but until then, we must hope for new solutions.

Previous Ringling Bros. Shuts Down After 146 Years
Next Congress Strikes A Blow At Alaskan Wildlife