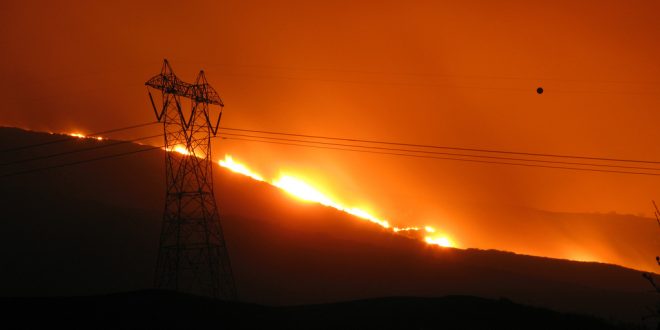 Wildfires have been devastating in California this year. The Napa Fires in October caused over a billion dollars in property damage, claiming 42 lives. Currently, there are numerous wildfires in the Los Angeles area. The Thomas fire that began December 4th is the largest of the wildfires in Southern California, burning 270 square miles. As of December 16th, the Thomas fire is only 15% contained. Over 4,000 firefighters are currently battling this wildfire. California is getting federal assistance to help battle these wildfires.

The fires were likely propagated by the large amounts of flammable vegetation and low humidity. Due to the large rainfall earlier this year, many plants flourished, only to become fuel for the fires now. Additionally, strong, dry gusts of wind originating from the deserts inland are helping the fire spread incredibly quickly. The winds average 40 mph, but can sometimes reach 80 mph. Though weather forecasters have predicted that the winds will persist for a day or two, it spreads smoke to nearby areas, potentially causing health issues. The California Department of Public Health has advised those in the Santa Barbara, Ventura, and the greater Los Angeles areas to stay indoors whenever possible. Governor Jerry Brown has stated that wildfires like these will become more common in the future, warning Californians to be prepared, and that California will become more vigilant in wildfire prevention.

Roger is a junior at Carlmont High School in Belmont, California. Roger serves as an officer of Help Everyone and Remember to Share (HEARTS) non-profit. Roger founded the first California Business Professionals Association (BPA) club at his high school and is active in other STEM related clubs. Outside of his busy school schedule, Roger practices karate, plays saxophone, reads, and volunteers for several worthy social causes in the US and China. Roger is extremely honored to serve as the News Column editor for the Rising Star Magazine.
Previous Tips for Junior Year
Next Benefits of Being a Consultant