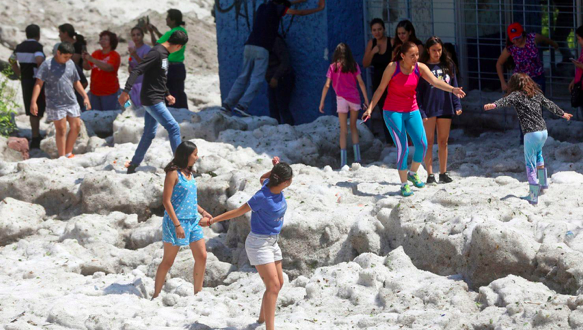 Guadalajara is one of Mexico’s most populous towns, known for its warm summers and tourism. The sunny climate is what draws the tourism there, so it was a sight when people woke up on a day in July to find out that their cars were buried under 3 feet of snow.

The governor of Jalisco, Enrique Alfaro, said that the Civil Protection personnel quickly began to clean and remove the ice. He also stated that had to pump out flood water after the snow started to melt.

After the event, Alfaro began understanding the existence of climate change, as these natural phenomena were never seen in a state where heat was predominant. People living in the mountainous area, which is 350 miles west of Mexico City, reported the damage to nearly 200 homes and businesses. Luckily, no injuries or casualties occurred.

The cause of the unusual event was a massive hailstorm that directly hit Guadalajara. This natural phenomenon proved the existence of climate change, as events like these would never happen if the climate wasn’t altered.

Although getting some unexpected snow might seem fun for some people, it really isn’t. Many parts of the city suffered major damage from it. For example, the drainage system was blocked by the enormous amount of ice, many vehicles were completely buried and damaged by the snow, and many homes suffered damages, leaving many families without shelter.

Guadalajara is a hot place, meaning the enormous amount of ice will melt sooner or later, but there are still risks that the city will soon be flooded.

Previous Got Stiff Neck?
Next Harmful Habits Through the American Dream