Home / Lifestyle / Should Allowance be Allowed? 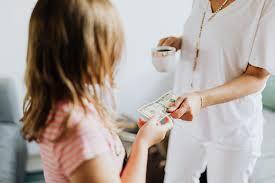 Should Allowance be Allowed?

For many children within the Asian-American community, the concept of allowance serves as an unattainable dream, in which they are culturally expected to take initiative within their household as part of familial duty. Understandably, students without allowance often envy those who do — but while this begrudging feeling may be justifiable, it’s not necessarily correct.

Parents who do grant allowance to their children — 68 percent of parents, according to an online 2019 T. Rowe Price survey consisting of over 1,000 children and parents —  believe that this money allows for their child to learn how to budget, save, and value money.

It turns out, however, that students without allowances grow to become more financially capable compared to their peers. According to Jumpstart Coalition’s “Improving Financial Literacy” survey, students with no allowance had an average financial literacy score of 52.5 percent. Meanwhile, students with allowance reliant on chores averaged 52.1 percent and students with unconditional allowance averaged 49.1 percent.

Additionally, children who receive allowance often have a declining work ethic or sense of initiative, since they’ve been raised to associate good work with money. In the absence of incentive, they are more likely to neglect their responsibilities in the future, according to Business Insider.

So, the next time you complain about your empty bank account to your lucky, allowance-possessing friends, be sure to add that in the long run, you’re probably benefiting more from doing chores than they are.