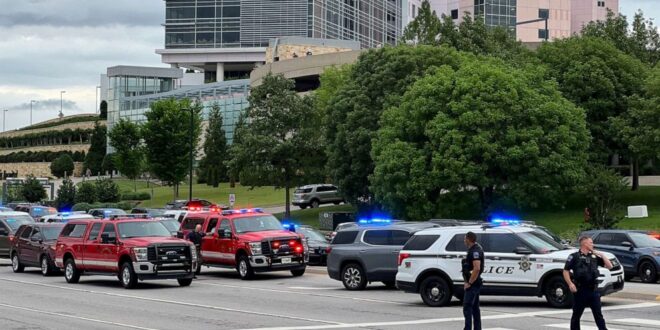 At least four people are dead after a shooter opened fire at a hospital campus in Tulsa, Oklahoma on Wednesday, police said in an evening news conference on the same day.

The gunman has been confirmed dead, police said. Authorities said during the news conference they believe that the gunman shot himself, according to Eric Dalgleish, Tulsa Police Department Deputy Chief.

Several other people were wounded, though none of them suffered critical injuries, according to police Captain Richard Meulenberg.

Dispatchers received reports of an active shooter at Natalie Medical Building, a physician’s office building on the St. Francis Hospital campus, around 4:50 p.m. local time, according to Dalgleish.

Officers arrived at the scene within minutes and made contact with victims and the suspect. Officers arriving were directed to the second floor by the sound of gunshots. No officers were injured.

Police said they are “getting close” to identifying the suspect, who according to police carried both a rifle and a handgun, and used both.

“It’s a horribly tragic event. I’m very, very proud of the officers for getting there as quickly as they did, very well potentially stopping more people from losing their life today,” said Meulenberg.

President Biden has been briefed on the shooting, a White House official said. The White House is following the situation closely and has reached out to state and local officials to offer support.

The Dallas Field Division of the Bureau of Alcohol, Tobacco, Firearms and Explosives, or ATF, while also on the scene.

What happened today in Tulsa is a senseless act of violence and hatred. I am grateful for the quick and brave actions of the Tulsa Police Department and other first responders who did their best to contain a terrible situation,” Oklahoma Governor Kevin Stitt said on Twitter.

The Saint Francis Health System said all appointments in certain locations scheduled before noon Thursday had been canceled in order “to allow our staff and caregivers the opportunity to process today’s tragic incidents.”

Previous My Experience with Auditioning
Next Why Is It Necessary To Wash the Dishes?