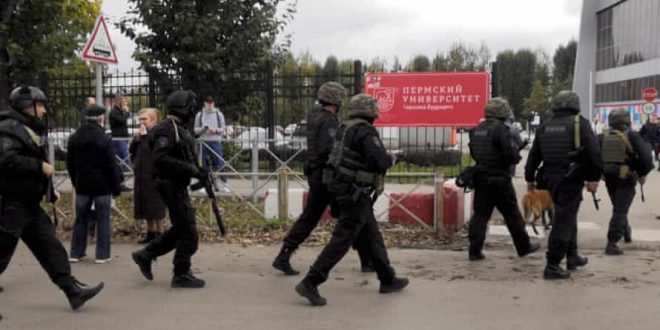 A gunman killed six people and injured 28 others after he started shooting at a university in the central Russian city of Perm.

The assailant, a student of the university, walked onto campus on Monday morning and opened fire.

Students and teachers barricaded themselves inside buildings, while others screamed and jumped from windows in attempts to escape the shooter. Footage released by Russian media showed students throwing backpacks and jumping out of second-floor windows while gunshots could be heard in the distance.

Authorities report that the attacker was injured in a shootout with police officers and detained afterward. Officer Konstanin Kalinin, one of the first to arrive at the scene, disarmed the assailant, who was wielding both a gun and a knife, before providing medical aid.

President Vladimir Putin spoke, calling the shooting “a great loss not only for the families who lost their children but for the whole country.”

The incident began at around 11:00 at Perm State University, which is 800 miles (1,300 kilometers) east of the Russian capital of Moscow. Initially, it was reported that eight had died, but officials revised the death toll down to six.

The gunman was reportedly acting alone, and claimed he had no religious or political motives.

On social media, he posted that he was consumed by hatred and intended to harm others.

“I’ve thought about this for a long time, it’s been years and I realised the time had come to do what I dreamt of,” a social media account attributed to him said before being taken down.

Earlier this year, a shooting at a school in the central Russian city of Kazan, which is several hundred kilometers west of Perm, took the lives of nine people and left Russia in shock.

Previous WOMEN CHANGING SPORTS
Next A Basic Guide to Thrifting