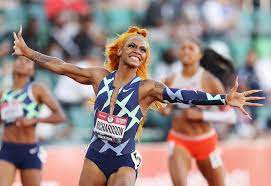 News came out just after the Olympic qualifiers that USA 100 meter sprinter Sha’Carri Richardson will be disqualified from the Olympics after testing positive for marijuana usage. This was extremely controversial with many famous sports players tweeting out in outrage to this rule. Many did not even know that you could “be kicked out of the Olympics for pot.” Richardson, who is 21 years old won the women’s 100 meter dash in Oregan and was a fan favorite to take first in Tokyo. Many people immediately loved her for her colorful hair, bright personality, and crazy speed.

The reason for her using Marijuana was due to her mother passing away a week before the trials, according to Richardson. During an interview, she was told that her mother had passed away and she used marijuana as a coping mechanism. When Richardson spoke out about this, she said “Dont judge me, because I am human… I just happen to run a little faster.”

Marijuana is legal in many states for recreational usage, including Oregan. But, there are different rules from the World Anti-Doping Agency. “All natural and synthetic cannabinoids are prohibited,” the agency says, including “hashish, marijuana and cannabis products.” The United States Olympic and Paralympic Committee follows WADA’s rules. Their reasoning for banning Marijuana was because it broke two of the three criteria: If they enhance performance, pose a health risk or violate “the spirit of the sport.” Based on a few current studies, cannabis can be seen as performance enhancing.

Many other sports players have been disqualified for high testosterone levels as well as not being able to wear a certain size swimcap. There are many unheard of rules that are just now coming into play, and many wonder if these will be loosened, or made even more prominent in further Olympics.