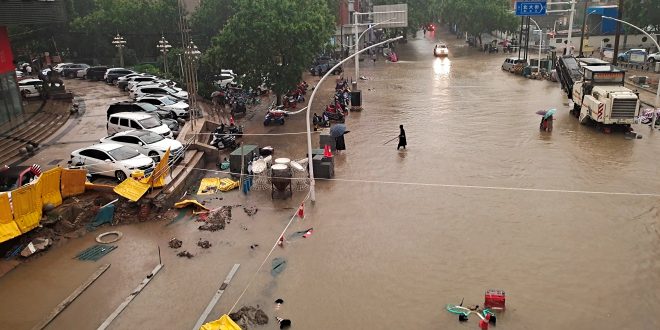 People wade through floodwaters on a road amid heavy rainfall in Zhengzhou, Henan province, China July 20, 2021. China Daily via REUTERS

Emergency workers in the capital city Zhengzhou of the central Chinese province Henan were working to pump out a flooded road tunnel, where hundreds of vehicles were reportedly trapped, before Saturday (7/24) night.

Authorities have not released an official death toll from the tunnel, but news portal ThePaper.cn quoted an unnamed official managing rescue operations as saying that his team had searched all of the vehicles at the tunnel and found four dead.

Rescuers were continuing to pump water out of the tunnel but no other victims had since been found, he told the media.

However, on Saturday evening, people continued to post on social media about missing family members who they feared had been trapped in the tunnel as well as at a flooded underground subway station in the city, where 12 people have been confirmed to have died.

More than 9.3 million people have now been affected by the flooding in central China, according to the Henan provincial authorities, which is more than triple the estimated 3 million reported on Thursday.

A total of 58 people have been reported dead since flooding began, with another five still missing, and the rain has caused economic damage worth 82 billion yuan, according to the local authorities.

About 815,000 people have been temporarily evacuated from their homes, while another 1.1 million have been relocated by the government. The deadly floods, which locals have figuratively described as a “once in a thousand years event”, has caused extensive damage in Zhengzhou and cut off electricity and water supplies.

Authorities are currently struggling to rescue people from flooded rural villages far from the city that lack power and clean water, and the floodwater is often contaminated with sewage and other pollutants, and authorities have urged residents not to drink unboiled tap water.