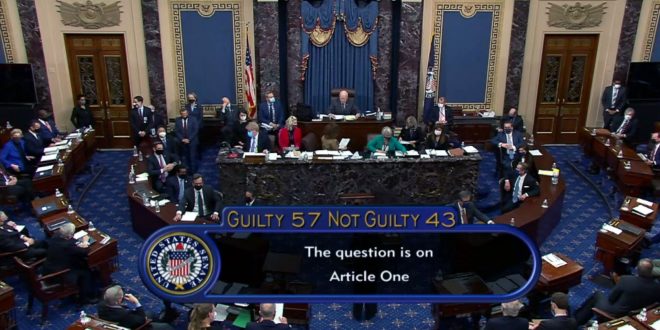 On Saturday, February 13th, the Senate voted to acquit Donald Trump of his role in influencing the January 6th insurrection at Capitol Hill. They voted on whether Trump had been “willfully inciting violence against the Government of the United States.”

Every Democrat in the Senate voted to find him guilty, and they were joined by 7 GOP Senators, for a total of 57 votes, falling 10 votes short of the two-thirds majority needed to impeach a president.

The vote occurred five weeks after the attack on the Capitol Hill on Jan. 6, when a pro-Trump stormed the government building in an effort to stop the counting of President Biden’s Electoral College win. One week later, the Democrat-led House moved to impeach Trump one week later, supported by 10 Republicans.

Trump is the only president to go through the impeachment process twice and the first to face a trial after leaving office.

Democrats warned that if Republicans didn’t help convict Trump, it would set a dangerous new precedent that a president couldn’t be held accountable during the final weeks of an administration. Trump was invited by House impeachment managers to testify, but the demand was rejected by his lawyers.

Even though many Republicans have distanced themselves from Trump, he retains a strong hold on part of the base, including voters GOP senators need to hold on to if they want to win back the House or Senate in 2022. And Democrats acknowledged that they were far short of needing the 17 Republican votes needed to convict.