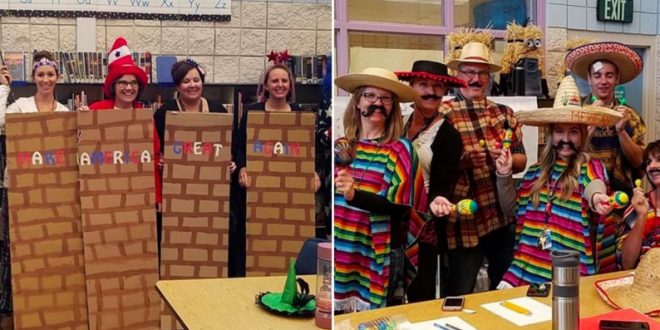 On Friday, November 2nd, photos circulated from an Idaho elementary school showing almost a dozen teachers, half of them dressed in costumes depicting typical Mexican stereotypes, and the other holding props of an apparent border wall. Those supposedly dressed as Mexicans donned colorful sombreros, ponchos, and dark brown mustaches; the others held cardboard “border wall” segments with letters spelling out “Make America Great Again.” The costumes were clearly created for Halloween the day before, but the pictures were posted on the following Friday.

By Saturday, the teachers appearing in the pictures had been placed on paid administrative leave. Obviously, the costumes were extremely inappropriate and insensitive, not only exploiting inaccurate but degrading stereotypes but also encouraging exclusion and discrimination. In an era of such high political tensions and controversy, it was a thoughtless decision. As a result, the superintendent has commenced an investigation into the issue, saying that although he believed that there was no malicious intent, it was the result of a poor judgment.

What’s more troubling, however, is that 12% of Middleton Elementary School, where the teachers reside, is of Hispanic origin. Obviously, this group has initiated enormous backlash, in fact, in a letter addressed to the superintendent from 12 different community groups, it argued that “the school and community climate in Idaho continues to grow more harmful against specific groups and identities, including our Latinx friends, family, and neighbors.”

Parents and community members lamented that Halloween was intended to be a relaxing, interesting time for kids to dress up and eat candy, not an opportunity for the defamation of specific cultures or backgrounds. Schools should be increasingly aware of these issues; in a climate where marginalization is perverse and especially in regions where minority groups reside, administrators should be vigilant and willing to take action when misbehavior is spotted. Educational institutions should be safe spaces where everyone is welcome; if we aren’t careful, however, education can only reinforce widespread discrimination and increase inequality. This is especially true with teachers. Teachers are some of the most influential people in the lives of children, and it’s up to them to mold the growth of future generations.