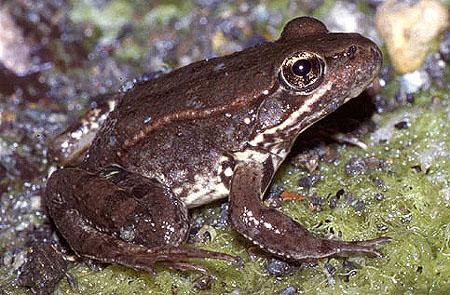 Save the California Red Legged Frog!

Planes, cars, boats, and countless other technological advances have greatly improved our world. But at what cost? Each year, many species of animals are pushed out of their habitats as a result of growing industrialization. Whether it is the blue whales preparing for their migratory trip south in the winter on the Santa Barbara channel, or endangered tigers being hunted for their body parts, they all share a common need: the need for help. One of these endangered animals is the 2-5 inch long California Red –Legged Frog, or Rana draytonii.

The California Red–Legged Frog, appropriately named due to the red coloration that may be found on their stomachs and legs, was much more plentiful before the California Gold Rush started in 1848. But due to the population boom of the people in California, they were nearly hunted to extinction for food (California Red-Legged Frogs were hunted for food throughout the 19th and 20th centuries). Today they are protected under the Endangered Species Act and can only be found in 238 streams in 38 counties in California, although there are some sightings of them in Baja California, according the U.S. Fish and Wildlife Service. They are also fourth in the list of America’s most threatened frogs.

California Red-Legged Frogs are commonly found in pools, streams, and wet grass. They will also eat just about anything they can catch and fit into their mouths. They mostly eat invertebrates, but, in some cases, they will eat other smaller amphibians and mammals. They are still endangered due to the fact that they have too many predators. They are constantly hunted by poachers, the American Bullfrog, raccoons, birds, and snakes. But most importantly, they are endangered due to the loss of their native habitat of shallow pools and muddy swamps. Expansion of new housing projects into the frog’s native land decrease the frog’s possible breeding grounds and living areas, causing the amount of land habitable by the California Red-Legged Frog to be able to support less frogs.

If you want to help the California Red-Legged Frog, first, you have to be near one of the streams they live in. Then, just put enough water in a hole by the stream to form a relatively shallow pool, then it is guaranteed that those red frogs will be living there in no time! Or, just take your family and friends to see these diminutive and rare frogs. Help them see that these frogs are part of California. Help them live to their deserved ten years of natural life! Help save the California Red-Legged Frog!