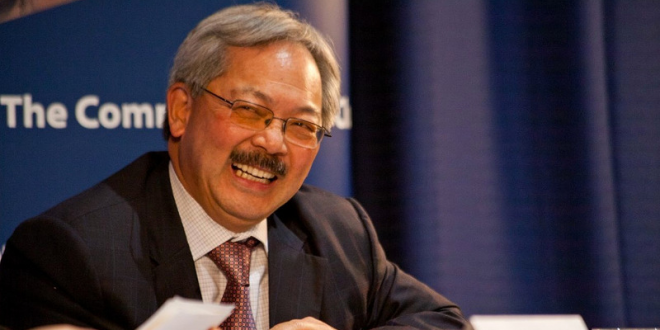 On December 12, 2017, Tuesday, at 1:11am, San Francisco’s first Asian-American mayor, Edward Lee, died at Zuckerberg San Francisco General Hospital at the age of 65. The mayor arrived at the hospital in critical condition shortly after 10 pm on Monday after suffering an apparent heart attack while shopping at the Safeway in Diamond Heights. Family, friends and colleagues were at his side when he passed.

Lee was appointed as mayor by the Board of Supervisors in January 2011 after former Mayor Gavin Newsom resigned to become lieutenant governor. Although he initially planned to serve in an interim capacity, his supporters persuaded to run for the position. He was elected that November, then re-elected in 2015. His term was to expire in 2019.

As the son of Chinese immigrants and a native of Seattle, Lee was the first in his family to attend college. He graduated from Bowdoin College in 1974 on a full scholarship and then from Boalt Hall School of Law at UC Berkeley in 1978. Prior to becoming a civil servant, he worked as a housing activist and civil rights attorney with the Asian Law Caucus. He joined city government in 1989 as an investigator under the whistleblower ordinance, then served as deputy of human relations, director of public works, city administrator, and a member of the Board of Supervisors. His election as mayor was a milestone for Asian-Americans, who make up one-third of the city’s population.

Lee was most recently credited with overseeing a technology-driven economic boom but was also criticized for the sky-high housing prices that resulted. Lee was dedicated to reducing the city’s greenhouse gas emissions, lowering rents and evictions, ending chronic veterans’ homelessness, stopping laws that discriminate against the LGBT community, and investing in infrastructure, parks and schools. Following Lee’s passing, the Board of Supervisors President, London Breed, was immediately named acting mayor, which has often been referred as “the toughest job in the City.” The Board will vote later on an interim mayor.

On Friday December 15, government workers, local celebrities, and residents streamed past Lee’s body to say goodbye as Lee’s body laid in repose in a closed casket draped with the American flag, behind velvet ropes, in the rotunda of City Hall.

Roger is a junior at Carlmont High School in Belmont, California. Roger serves as an officer of Help Everyone and Remember to Share (HEARTS) non-profit. Roger founded the first California Business Professionals Association (BPA) club at his high school and is active in other STEM related clubs. Outside of his busy school schedule, Roger practices karate, plays saxophone, reads, and volunteers for several worthy social causes in the US and China. Roger is extremely honored to serve as the News Column editor for the Rising Star Magazine.
Previous Campus Sexual Assault
Next Laziness vs. Creativity