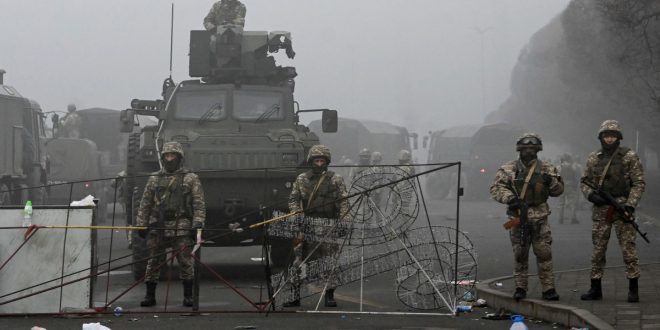 On Thursday, Russian troops arrived in Kazakhstan in a “peacekeeping” operation by a Moscow-led military alliance in order to restore presidential authority over the country, said Russian news agencies.

Kassym-Jomart Tokayev, President of Kazakhstan, asked for intervention from the Collective Security Treaty Organization (CSTO), a Moscow-led alliance with members Armenia, Belarus, Kazakhstan, Kyrgyzstan, and Tajikistan. The request was put forward on Wednesday, and it was quickly approved by member countries.

The intervention comes as riots continue in Kazakhstan and Kazakhstan police and troops attempt to quell the unrest.

Reports of the number of casualties are largely unreliable, though a spokesperson for police in Almaty, the largest city, has said that dozens have been killed while attacking government buildings.

As of Thursday, Almaty city authorities stated that 353 police and security personnel had been injured, and 12 were killed. On Thursday morning, troops entered the main square of the city, and shots were heard as they approached the crowd.

State television reported the same day that the National Bank of Kazakhstan had suspended operations and the internet and mobile phone reception were both down.

The protests began in the western part of the country last weekend, following a sharp rise in fuel prices, and have rapidly spread to other parts.

Protests have grown due to rampant discontent with the President Tokayev and former leader Nursultan Nazarbayev.

“Nazarbayev and his family have monopolized all sectors, from banking to roads to gas. These protests are about corruption,” one protester stated.

Previous Top 5 NBA Rookies as of 1/2/22 (Based on NBA.com)
Next Space Deep-Sleep