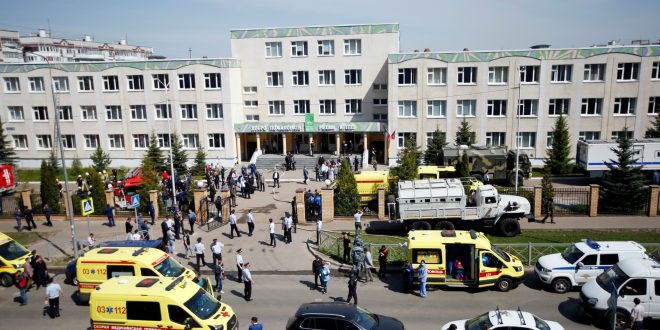 Ambulances and police cars and a truck are parked at a school after a shooting in Kazan, Russia, Tuesday, May 11, 2021. Russian media report that several people have been killed and wounded in a school shooting in the city of Kazan. Russia's state RIA Novosti news agency reported the shooting took place Tuesday morning, citing emergency services. (AP Photo/Roman Kruchinin)

At least nine people, including several children, were killed on the morning of Tuesday, May 11th after a teenage gunman opened fire at a school in Russia’s southwestern city of Kazan, according to local authorities.

Seven schoolchildren were among the victims, according to Rustam Minnikhanov, head of the Tatarstan republic, of which Kazan is the capital. He said the children were in their eighth year of school, which would make them around 14 to 15 years old. A teacher and another school employee were also killed.

At least 21 others were hospitalized with injuries, including 18 children, according to local authorities. Six are reportedly in intensive care.

The attacker, identified only as a 19-year-old, was arrested by authorities. Officials gave no details on the motive of the attack. However, Russian media reports say that the gunman was a former student of the school who had called himself “a god” on his account on the messaging app Telegram and promised to “kill a large amount of biomass” on the morning of the shooting.

The attack reportedly began on Tuesday morning around 9:30 AM local time. In a video filmed by a witness, children could be seen jumping from the third floor of the building to escape the shooter. An investigation is underway regarding the shooting. State TV broadcast a separate video showing what it said was the suspect.

Russian President Vladimir Putin expressed his condolences to the families of the victims and wished a speedy recovery to those wounded in the attack, ordering the government to give them all necessary assistance. The Kremlin sent a plane with doctors and medical equipment to Kazan, and the country’s health and education ministers also headed to the region.

Putin has ordered Victor Zolotov, head of Russia’s National Guard, to review the country’s gun ownership regulations. Russia has strict restrictions on civilian firearm ownership, but some categories of guns are available for purchase for recreation or self-defence, once those applying have passed certain tests and requirements. Zolotov was expected to urgently look into the status of weapons that can be registered for recreation in Russia but are more heavily regulated in other countries. The suspect held a permit for a shotgun since April 28.

This incident was the deadliest school shooting in Russia since a college student shot killed 20 people before committing suicide in Russian-annexed Crimea.

Previous Are No-Hitters Ruining the Game?
Next Wisdom Teeth