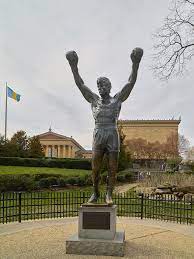 I stand at the bottom of the Philadelphia Museum of Art’s 72 stone steps. Peering up, I notice something is missing. For decades, a larger than life bronze statue stood at the top of the stairs. Clad in boxing attire, this figure’s arms were raised high in the gesture of a champion.  This statue was a movie prop from one of a series of Rocky films which began in 1976, America’s bicentennial year, and which continue into 2021 as the Creed series. The iconic centerpiece in Rocky, the first of these movies, is the cinematic montage of a down-on-his-luck boxer who, finding his heart in more ways than one,  pulls himself up for the fight of his life. The montage climaxes with the title character running to the top of the museum’s stairs, turning, and raising arms, as if to say to the “City of Brotherly Love”, I am a winner and if you work hard and dare to believe in yourself, you can be too.
Boxing has been part of cinema for almost 100 years, and was a real life entertainment for the masses for thousands of years before.  Early Greek and Minoan art depicts boxing matches. More recently, Hollywood discovered the comedic potential of boxing. Battling Butler (1926) is a silent film starring Buster Keaton as a pampered young man who pretends to be a famous boxer to impress a woman. In 1931, Charlie Chaplin  explored similar comedic territory in Boxing.  But boxing seems to excel as drama. From Million Dollar Baby, to Raging Bull, to When We Were Kings, the dramatic potential of boxing seems unlimited.
Yet, if I have to pick a favorite boxing film, it would be Rocky. While Rocky is on its surface a simple underdog story, for me it also has a mythic quality. The hero must find it in himself to battle a seemingly insurmountable foe. To do this he needs the aid of a wise mentor. With this mentor, a comedic side-kick, and possibly a love interest, the hero must find it within himself to take on his foe. Sound familiar?  Remember this movie came before Star Wars and Harry Potter.
There is also a reality behind the making of Rocky that mirrors the movie itself. The movie’s star, Sylvester Stallone, was a little known and down-on-his-luck actor who realized that he might never find his breakout role. He wrote the Rocky screenplay and began shopping it around Hollywood. The powers in Hollywood liked the story and wanted to buy it, but they did not want to hire Stallone for the role. They wanted a famous actor who would sell more tickets. Stallone, with little money in the bank and looking to sell his dog because he could not afford to feed it, said no to all these offers. Finally a studio bought it on the condition that he would work for scale (minimum actors wages) and would do rewrites for free. He said yes and history was made.The film was nominated for 10 Oscars, winning 3, and making Stallone one of the most bankable stars of the 70’s, 80’s , and 90’s.
After 45 years, we are still watching Rocky and the movies it gave rise to, including Creed and Creed II. The underdog story still gives us all hope, yet the statue is gone. They said it was not art and moved it from its prime position, to a spot down and around to the side. I say, what is art if not something that makes us feel.