Home / Opinion / Where are the Rights of Chinese Doctors 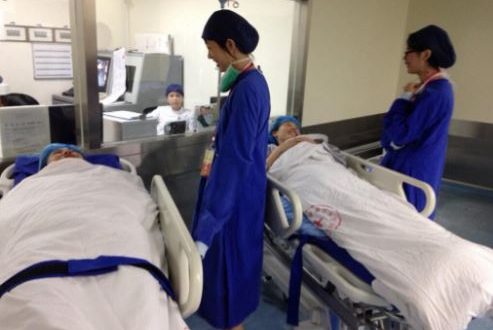 Where are the Rights of Chinese Doctors

On July 15th, a tragedy which occurred in Guangzhou caught the sight of most citizens in China. A female doctor was attacked by a patient during patient-checking hours. Being cut for eight times, the doctor was seriously injured and sent to hospital immediately. Surprisingly, the patient indicated that this intention fell into his mind because of the sequela after his treatment.

However, this is not the only doctors-being-killed event in China. In merely 49 days, 16 similar events took place throughout China. Being a doctor, which was supposed to be one of the most respectable jobs, became the least popular choice among college graduates. These events keep me wondering what is the vital cause and the solution to this current situation.

Firstly, after these events took place, there was no official response from the government. As time passes, they simply fade out of people’s minds. I hope the government of China can take these events seriously and inflict punishments on the instigator. Therefore, not only can citizens understand the serious consequence caused by illegal actions, but the right of doctors will also be preserved.

Secondly, compared with doctors in Europe and North America, Chinese doctors have a massive amount of working hours. Each patient can only receive a 15-minute diagnosis in the first place. Despite inquiry about their diseases, the patients also ask about the locations of various examinations or basic questions such as how to make an appointment. If the following work is done by volunteers, doctors’ pressure will be reduced in some way. As a member of the Shanghai volunteering association, I have experienced this job myself.(volunteering photos enclosed behind) As a consequence, not only the patients became more satisfied with the detailed explanation, but the daily work of doctors also became more efficient! I appeal teenagers in China to take part in the volunteering activities in hospitals. Our efforts together can make a big difference!

Finally, I can’t help questioning the moral sense in some of the Chinese patients’ minds. We all should know that some diseases are unable to be cured, yet doctors have already taken every effort to help patients feel better. Is it the misery or sense of loss in their  heart that blind their eyes and make them seek the illegal ‘revenge’ to the person who once gave them a hand? If we are not grateful to the people that helped us and even kill them, who would be willing to help us anymore? I do hope the patients can obtain gratitude in their heart and doctors could treat patients with more tolerance.

It is everybody’s responsibility to establish a harmonic doctor-patient relationship!

Previous Why grades don’t define you
Next Save the Ospreys!