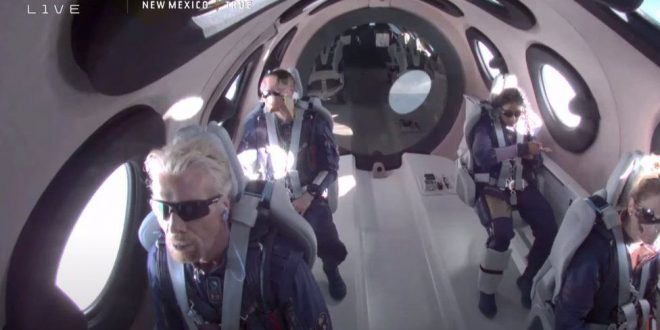 Traveling to space must be “more accessible to all”, Virgin Galactic founder Richard Branson said during a news conference following his successful flight aboard Galactic’s VSS Unity earlier today.

“We’re here to make space more accessible to all. We want to turn the next generation of dreamers into the astronauts of today and tomorrow. We’ve all us on this stage have had the most extraordinary experience, and we’d love it if a number of you can have it, too,” he said. “If you ever had a dream, now is the time to make it come true. I’d like to end by saying welcome to the dawn of a new space age.”

The flight carrying Branson to space on VSS Unity took roughly one hour, and unlike conventional space travel where astronauts circle the Earth and float in space for days, Virgin Galactics flights are brief, up-and-down trips. However, the spacecraft will still fly more than 50 miles above Earth, which is considered by the U.S. government to be the boundary of outer space.

The SpaceShipTwo VSS Unity was attached in between the twin fuselages of mothership WhiteKnightTwo, and took off from a traditional runway at Spaceport America in Truth or Consequences, New Mexico.

The four-engined mothership reached an altitude of about 50,000 feet before dropping the spacecraft. VSS Unity then lit its own rocket engine, and climbed to an altitude of over 50 miles above the desert floor.

However, some have disputed that Richard Branson is actually going to space, notably competitors at Jeff Bezo’s Blue Origin, who cite the fact that only the United States defines space as 50 miles above the Earth’s surface, while the rest of the world uses the Kármán line, which is 62 miles high.

Regardless, Richard Branson’s trip to space is a significant milestone in the potentially coming age of commercial space flights.