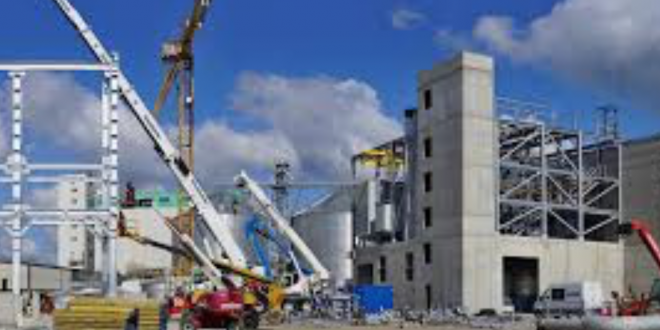 On May 18 in the McAfee Center, Saratoga High School’s Raising Interest in Science and Engineering (RISE) Club hosted the speaker series “Engineering a Greener World.” An opportunity for students and members of the community to learn about the ways engineering can address environmental issues, the event covered topics ranging from renewable energy, access to clean water and construction materials.

“The third pig’s fault?” refers to the story of the three little pigs, which Nilsson used as an analogy to represent widespread perspectives on appropriate construction materials.

Nilsson reviewed the pigs’ materials of choice: the first little pig with a house built of straw? No thanks. The second pig built a house made of wood—an improvement but still not ideal. The third pig, however, built a house made of brick and mortar, creating arguably the most durable and stable home.

People may believe that bricks and mortar are necessary for resilient, long-lasting buildings. The problem is, bricks and mortar are far from sustainable; mortar is made of cement, the production of which emits carbon dioxide. According to Nilsson, for every tonne of clinker, a substance used to make cement, produced, 0.9 tonnes of carbon dioxide are released, resulting in an approximate 1:1 ratio.

Although some people may think that carbon dioxide from cement production may not contribute to climate change to a significant extent, Nilsson explained that out of all the raw materials the U.S. consumes, there has been an exponential growth of construction materials in recent years. Considering population growth, Nilsson also stated that the world consumption of steel has increased by 426 percent, and the world consumption of cement has increased by 1110 percent between 1961 and 2012.

Thus, dismissing construction’s impact on climate change would ignore an entire industry’s effect on rising global temperatures via production, transportation, and the actual act of building. In order to accommodate increasing populations, the demand for more houses and other buildings fuels greater material consumption. It is necessary to remain aware of what materials are used, what impact the materials have on the environment and whether the use of certain materials is actually necessary.

There are surprising alternatives to reduce a reliance on materials like cement. For example, using volcanic ash can reduce the need for cement by around 40 percent, Nilsson said. In addition, homes made of straw bales have been built, including ones constructed in the 1920s that are still standing today. Nilsson also explored the use of bamboo to replace wood. Wood quality has diminished as younger and younger trees are cut down, partly because older trees are less available and partly because people do not want to wait hundreds of years for trees to grow. According to Nilsson, a major concern in the construction industry is the fact that wood from younger trees is weaker and less safe than wood from older trees.

In short, Nilsson’s presentation challenged preconceptions about what houses and buildings should be made out of and also engaged an audience largely made up of high school students. This provided a chance for youth to learn more about addressing environmental issues is essential. As the generation that will build the future, whether literally with construction or by other means, we need to know how to tackle what may feel like a daunting global problem with few practical solutions.

Although a simple high school event may not seem particularly noteworthy, perhaps audience members returned to their homes—made of (likely) unsustainable materials—feeling inspired by the various presentations. Hosting similar events that invite people, especially youth, to listen to possible solutions and express their opinions ultimately helps foster the ideas needed to draw a blueprint for a more sustainable future. Hopefully, communities can then begin to take more concrete — pun intended– action against climate change.

Previous Stretching against Stress
Next How to “Relieve Stress”