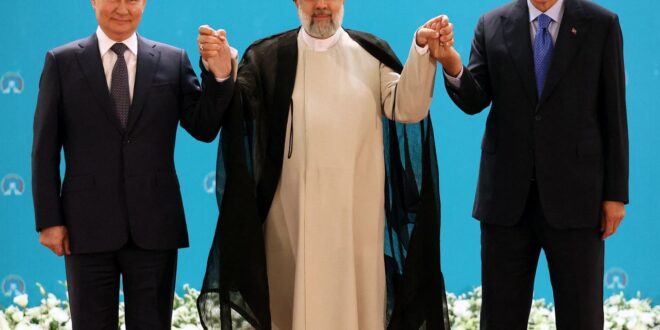 The summit focused on unblocking Ukrainian grain exports via the Black Sea, and Putin said that progress had been made.

The civil war still raging in Syria was also discussed, with Turkey and Russia both historically backing different factions.

The summit was a chance for Putin and Russia to show that it still had international allies.

After his meeting with Putin, Iran’s Supreme Leader Ayatollah Ali Khamenei said that Iran and Russia should strengthen ties, and that the West was to blame for the war in Ukraine.

Mr Khamenei told Mr Putin, “If you did not take the initiative, the other side would have caused the war with its own initiative”.

On the flip side, the US said that Putin’s visit to Iran showed how isolated Russia had become following the invasion of Ukraine.

Following the Russian invasion of Ukraine, another sovereign country, Russia has lost many of its international connections, and has gained akin to pariah status in the West.

Russia is using the summit to demonstrate that it has retained both allies and geopolitical influence despite the war in Ukraine.

However, this doesn’t mean that Russia is the closest of allies with either Turkey or Iran. Turkey and Russia support opposing factions in both Syria and Libya, and the two powers are competing for influence in the South Caucasus. Turkey has also sold weapons to Ukraine, notably its combat drones. The relationship between Iran and Russia can more accurately be described as a strategic partnership, though that may be subject to change. Iran and Russia compete on the global energy market.

Putin’s meeting with Erdogan marks his first meeting with a NATO country leader since the onset of the war. Turkey, unlike many of its NATO counterparts, has refused to join in sanctions against Russia and has attempted to mediate between Russia and Ukraine.