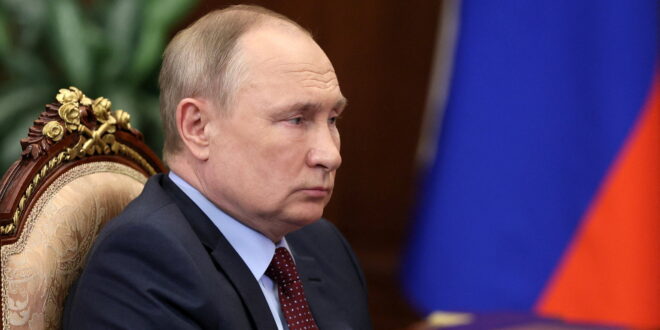 Russian President Vladimir Putin attends a meeting with the head of the Russian Union of Industrialists and Entrepreneurs Alexander Shokhin in Moscow, Russia March 2, 2022. Sputnik/Mikhail Klimentyev/Kremlin via REUTERS ATTENTION EDITORS - THIS IMAGE WAS PROVIDED BY A THIRD PARTY.

Russian President Vladimir Putin said on Saturday that Western sanctions on Russia were akin to a declaration of war and warned that attempts to impose a no-fly zone in Ukraine would lead to disastrous consequences for all countries involved.

Putin restated that his objectives were to defend Russian-speaking communities through the “demilitarization” and “de-Nazification” of Ukraine so that the former Soviet neighbor would become neutral and no longer be a threat to Russia.

The West has dismissed this justification as a baseless pretext for the invasion he launched on February 24th and have imposed wide-ranging sanctions aimed at the Russian economy.

“These sanctions that are being imposed are akin to a declaration of war but thank God it has not come to that,” Putin said, speaking to a group of flight attendants at an Aeroflot training centre near Moscow.

He also stated that any attempt by a foreign power to impose a no-fly zone over Ukraine would be considered by Russia as an interference in the military conflict. He reiterated that such an intervention by another power in the war would be catastrophic all countries.

NATO has rejected Ukraine’s request for a no-fly zone, reasoning that it would escalate the war beyond Ukraine and possibly involving the United States and Europe in a war with Russia.

“There is not one conscript and we don’t plan for there to be. Our army will fulfill all the tasks. I don’t doubt that at all. Everything is going to plan.”

The statement contradicts with Western intelligence reports, which appear to show that the Russian advance on Kyiv has been slowed by fierce resistance from the Ukrainians.

Previous Eileen Gu in the 2022 Beijing Olympics
Next “All Power to the Soviet!”: Lenin’s short term political influences in the 20th Century Russia