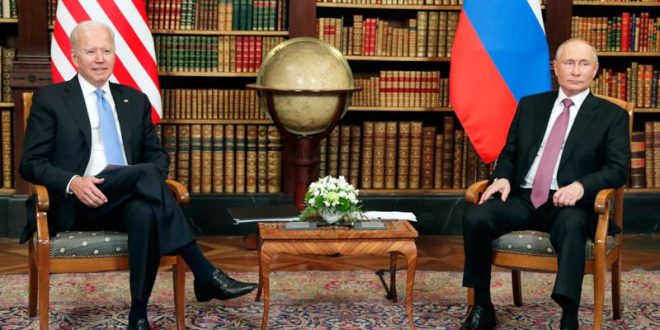 President Biden and Russian President Vladimir Putin have met for the first time since Biden took office in Geneva, Switzerland.

The summit was described by the President Putin as “constructive” while Mr. Biden said he “did what I came to do”.

Both world leaders spoke to reporters in separate news conferences after roughly three hours of meetings discussing topics such as cybersecurity and arms control. The two leaders released a joint statement afterwards stating that “even during periods of tension”, progress can be made on “ensuring the predictability in the strategic sphere, reducing the risk of armed conflicts and the threat of nuclear war.”

Biden told reporters that Putin “knows I will take action” in working to stop Russia from engaging in subversive actions in the United States, such as interfering in U.S. elections, engaging in hacking attacks, such as those targeting SolarWinds and ransomware attacks on U.S. companies. Biden added that Putin “knows there are consequences” and said Russia’s credibility “shrinks” when it participates in cyberattacks.

However, when pressed by reporters on whether he was confident Putin would change his behavior, Mr. Biden said “I’m not confident of anything.” The president has also said that Putin knew there would be consequences if jailed opposition leader Alexey Navalny dies.

Putin, at his press conference, did not address Navalny by name, but said Navalny had deliberately broken the law and wanted to be arrested when he returned to Russia after receiving medical treatment in Germany for his near-fatal poisoning. Navalny, the U.S., and its allies blame his poisoning on Russia. Putin skirted the topic of Ukraine after NATO affirmed Ukraine’s sovereignty at its recent meeting in Brussels.

After the summit, Mr. Biden said his first foreign trip showed “America is back” and said he owes world leaders a “debt of gratitude” for backing him in Putin talks.