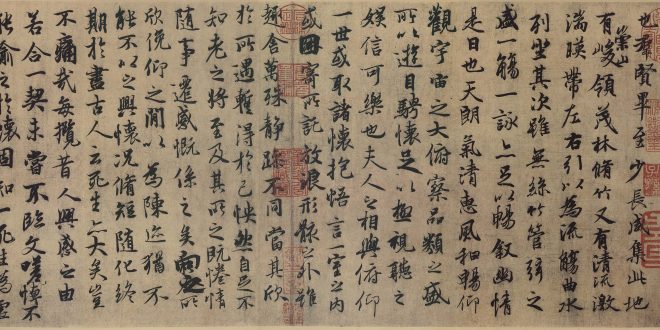 Preface of the Orchid Pavilion

Wang Xizhi (303-361), a well known calligrapher in Jin Dynasty of China and regarded as the Sage of Calligraphy, wrote the Preface of the Orchid Pavilion (or Lanting Xu as referred to by the Chinese). This work was a preface to a collection of poems which were written by Wang and his friends, a group of poets, who gathered together to write poem in a place called Lanting (Orchid Pavilion).

Written in  a semi-cursive Chinese script, Xing Shu, which means “fast hand-writing”,  the Preface comprises of 324 words. It narrates the beauty of the scenery around Kuaiji mountain of Lanting and the happiness of the gathering that prompted Wang and his friends to meet at Lanting to write poems celebrating their ancestors. However, at the end of the Preface, the author expressed the impermanence of life and death and the ephemeral nature of good times. The intriguing phenomenon about this masterpiece was that Wang wrote the first version of the Preface while he was drunk in one afternoon. When he woke up the next day, Wang rewrote it but felt that it was inferior to the original. Perplexed by the outcome, he tried again many times but none of them turned out as exquisite as the original. Eventually he realized that the original was his best work.

The Preface of the Orchid Pavilion was unanimously regarded as the best calligraphy in the world. The emperor of Tang dynasty, Tang Taizong, was an admirer of Wang’s work and was so obsessed with the Preface that he kept it exclusively during his lifetime. Upon the emperor’s death, the Preface was said to be used as a sacrificial object and was buried in his mausoleum. Since then the original has vanished from the world.  Several copies from Tang dynasty were circulated among nobles and royals and passed on from generation to generation. Many of those copies were presumably be destroyed as well due to the ravages of time. Nevertheless some copies survives, and it is a never-fading dream for the calligraphers in the world to visually see the copies from Tang dynasty.