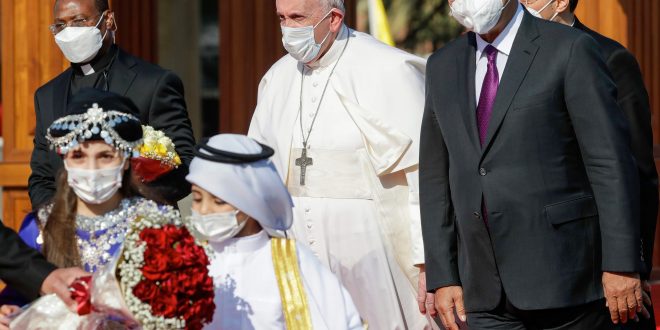 On Friday, Pope Francis has just landed in Baghdad as part of the first-ever papal trip to Iraq, seeking reconciliation in a country embroiled in a severe coronavirus outbreak and political unrest, and with extraordinary religious culture and history.

Pope Francis called for cooperation among ethnic groups in the palace once used by Saddam Hussein, and an end to violence in the name of God in a church where, 10 years ago, a shooting that killed 58 people occurred.

“I come as a pilgrim of peace,” Francis said.

Francis’s four-day visit to Iraq is his first international trip since the start of the pandemic, and marks a return of his signature globe-trotting diplomacy, primarily to minority-Christian countries.

The timing of this trip raises questions, as coronavirus cases in Iraq are currently surging exponentially, causing the Iraqi government to impose restrictions on events including religious gatherings, and armed groups such as the Islamic State and local militias are vying for power.

However, by visiting the Shiite Muslim-majority nation while other global figures are staying put, and lending a hand in the reconstruction of a nation stricken with chaos following a U.S.-led invasion and war with the Islamic State, his trip amounts as a show of encouragement for the Iraqi situation.

The Vatican had said that Francis’s events would include smaller crowds than usual to combat the spread of the coronavirus pandemic, but thousands of people lined highways along his travel route nonetheless, and people crowded together to greet Francis at the airport.

Speaking at the Our Lady of Salvation Church, where the 2010 attack by al-Qaeda associated gunmen took place, Francis condemned religious violence saying, “In this regard, the religious, cultural and ethnic diversity that has been a hallmark of Iraqi society for millennia is a precious resource on which to draw, not an obstacle to be eliminated,” and that violence was “incompatible with authentic religious teachings.”

Francis is set to meet with Grand Ayatollah Ali Sistani on Saturday, who is a preeminent figure in Shiite Islam and Iraq’s leading religious authority.

The U.S. Embassy in Baghdad has also issued a warning to U.S. citizens living in Iraq of possible attacks timed during Francis’s visit.