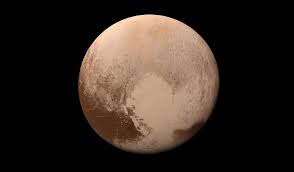 New research about Pluto has challenged initial assumptions about the dwarf planet’s characteristics. Astronomers and researchers long assumed that Pluto was a planet with low temperatures because it was formed in the Kuiper Belt, a region home to some of the coldest and darkest objects in our solar system. Pluto’s position at the very edge of our solar system contributes to its inhospitable surface temperature of about negative 378-396 degrees Fahrenheit. Researchers also believed that Pluto had a liquid ocean under its outer shell and that the liquid ocean formed after radioactive elements were heated decayed near Pluto’s core. This heat could have been enough to melt ice and form the subsurface ocean.

However, recent research from NASA indicates that Pluto may have originated as a hot planet with a preexisting liquid ocean. In 2015, NASA’s New Horizons Spacecraft captured geologic images of Pluto’s surface. The new data showed that the surface features on Pluto best matched a hot formation scenario. Researchers think that according to these new findings, the liquid ocean likely froze slowly over time, creating the extensional faults seen by New Horizons in Pluto’s icy crust. This long, slow freeze of Pluto’s subsurface ocean could also explain the mix of features on Pluto’s surface since expansions would have occurred throughout the history of the dwarf planet.

Carver Bierson, the first author of the newfound research and a PhD graduate from the University of California, Santa Cruz, is confident that the observations of expansion fits well with the assumption that Pluto started with a liquid ocean. Otherwise, researchers would be able to observe compression marks, instead of expansion, if Pluto had started as a cold formation. As Bierson reflects on his research on Pluto, he says that “the most exciting part is that [researchers] can use the geology we observe on Pluto today to peer back in time and learn about what Pluto was like shortly after its formation.” As new research and data come to light, astronomers and researches will then be able to fully know whether these discoveries and assumptions about Pluto are accurate.

Previous The Dangers of Consuming Chemicals
Next Should You Get a Pet?