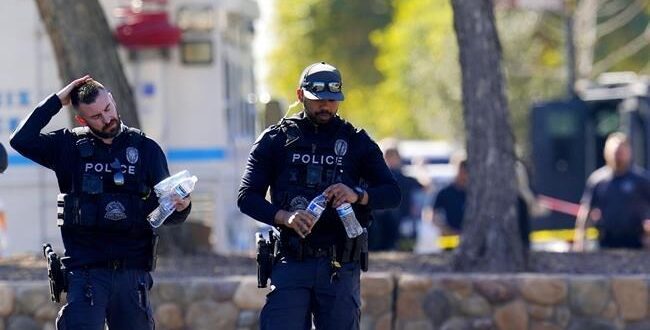 A Phoenix man who shot his ex-girlfriend ambushed police arriving at the scene, seriously injuring them as they tried to rescue a baby that had been left outside the house.

The woman later died, and a total of five officers were shot, including one that was the first officer to arrive on the scene and four that were wounded today trying to take the baby to safety.

Four more officers were wounded by shrapnel and ricocheting bullets, according to police. Of the five officers shot, four remain hospitalized, and all are expected to survive. The baby girl was unharmed.

“A baby is safe today because of our Phoenix police officers,” said Major Kate Gallego at a news conference.

The first officer arrived at the scene around 2:15 a.m. investigating a report of a woman shot. According to police, he was ambushed when invited inside the house. The suspect then shot him multiple times but the officer was able to get to safety.

Afterwards, another man came out of the house holding a baby. He laid the baby down in a blanket near the front door and raised his hands in surrender and was detained by police.

When officers attempted to retrieve the baby, a gunfight broke out between the suspect and police, leading to the suspect barricading himself in. Eight officers were injured in the exchange of gunfire.

Police were able to bring the baby to safety, and a SWAT unit took over. The suspect remained barricaded and was found dead several hours later from a gunshot wound.

Police also found the suspect’s ex-girlfriend in the home. She had been shot and was critically injured, and died several hours later at a hospital.

Previous The Most Popular Sports
Next Spatial Audio Demystified