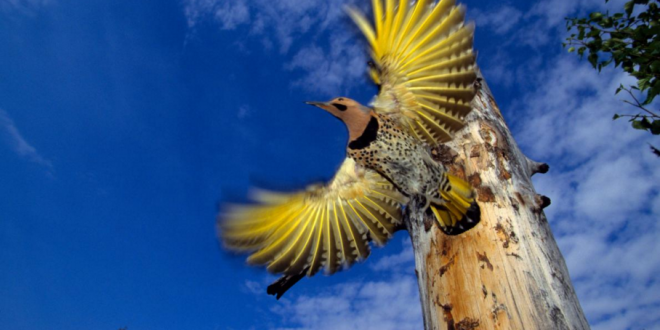 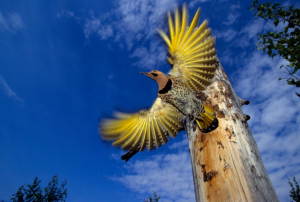 We have all heard the phrase, “you are what you eat”, too many times. Of course, it has never meant to be taken literally—that is, until now.

For the yellow-shafted northern flicker, the phrase rings blatantly true. Named for the thin vein of yellow that runs through the center of their dark feathers, some of the northern flickers’ feathers had mysteriously turned red.

The ethereal change in color turned out to be the result of the birds’ diets: red berries that turn their feathers a crimson shade. In fact, the vibrant yellow, red, and orange hues seen in fowl plumage all stem from the pigments in their food.

“Colors are an important signal in birds, so a change in color can have huge impacts,” study leader Jocelyn Hudon, an ornithologist at the Royal Alberta Museum in Canada, notes.

However, the phenomenon does not stop at yellow-shafted northern flickers. Similarly, the yellow tips of cedar waxwings have been recorded to turn red. Initially, scientists were stumped—the waxwings had no close relatives with red feathers and although the waxwings love berries, it did not make sense for their feathers to abruptly change color as they co-evolved with the berry plants.

Upon further studies, scientists found that the waxwings were actually consuming invasive red honeysuckle berries. Honeysuckle bushes first made their entrance in the late 1800s, from Europe and Asia, as a means for landscaping as well as bird habitat and food. They would then move on to spread across the continent, becoming an invasive species.

Although it is unknown what the color change does for mating or how many bird species have experienced such a phenomenon, it is certainly another example of the unexpected effects invasive species can have.

Cindy is senior at Henry M. Gunn High School and is incredibly honored to be a part of the Rising Star Magazine team. She enjoys belting out Disney songs, playing piano, watching Chinese dramas, and babysitting. Cindy serves as California DECA's VP of Silicon Valley and is also the singing teacher at FCSN and the President of HEARTS Nonprofit. She can be contacted at cindy@risingstarmagazine.com
Previous Is Daylight Saving Time (DST) good for your health?
Next #NODAPL