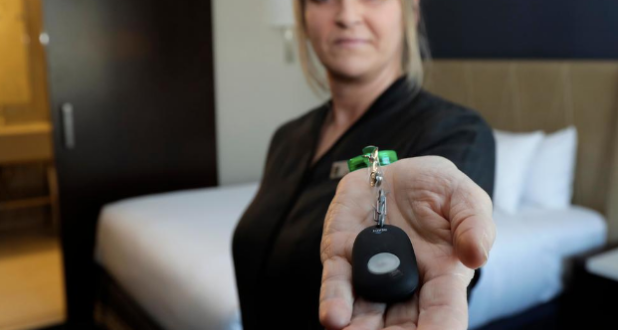 Panic Buttons for US Hotel Staff

Hotel employees who work alone or in isolated areas, who are often vulnerable to harassment and sexual assault, will be equipped with panic buttons, the world’s largest hotel companies announced Thursday, September 4th.

The top executives of Marriott, Hyatt, IHG, Wyndham, and Hilton hotels, working with the nation’s largest hospitality trade group, made it their goal to give all at-risk employees in the U.S. buttons by 2020. The devices will become job standards, along with anti-harassment training and policies for their thousands of workers.

Marriott and Hilton executives announce the training and devices will be required not only in hotels owned by the large hospitality companies, but also in franchise hotels that are independently owned.

“This is an ongoing challenge,” Lugar said at a Washington D.C. news conference attended by industry executives. “No industry is immune from dealing with issues of sexual harassment.”

Hotel housekeepers have been reporting through union leaders that they have no protection against harassment or assault when they are alone in hotel rooms with guests or other workers. This first prompted Southern California unions to mount initiative campaigns for panic buttons.

Organizers of hotel employees in Los Angeles, who learned of the initiative later, said the announcement comes as a surprise because they claim hotel industry groups have until recently been working to kill local measures in California to require panic buttons for hotel workers.

Other hotel companies are also a part of the industry effort — including Best Western Hotels & Resorts, Four Seasons Hotels and Resorts — released statements Thursday saying they, too, plan to implement these changes.

Previous Ticks
Next The Web Strategy