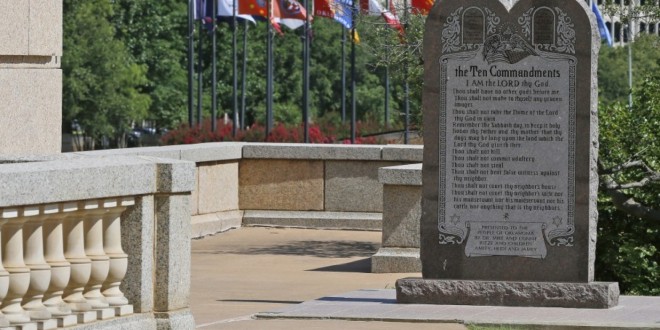 On June 30, the Oklahoma State Supreme Court ruled that the controversial Ten Commandments monument placed on state capitol grounds must go because public property must not be used for the support of any religion.  This was a victory, no matter how small, for anyone who values religious neutrality and separation between the church and the state, but as with any ruling, there are those who oppose it.

Oklahoma Governor Mary Fallin is delaying the removal of the monument, directly opposing the court ruling, and has requested a rehearing of the case. As it happens, she is not the only one unhappy with the court’s decision. Oklahoma state representative Kevin Calvey has said that the justices should be impeached for making the decision to remove the Ten Commandments monument, stating that, “We need to restore the balance in our state government and not put up with this kind of judicial tyranny.” Former state representative Mike Reynolds has also stated that he is against the removal of the monument, claiming that although some people might have said that it is a religious monument, the people who passed the bill did not. It represents history, they say, the Ten Commandments represent the U.S. Supreme Court.

Judges have remained adamant in their decision, reiterating their original statement that the monument must be removed as it does not comply with the Oklahoma Bill of Rights, which states that, “No public money or property shall ever be appropriated, applied, donated, or used, directly or indirectly, for the use, benefit, or support of any sect, church, denomination, or system of religion, or for the use, benefit, or support of any priest, preacher, minister, or other religious teacher or dignitary, or sectarian institution as such.”

The monument has been a controversial topic since even before it was erected in 2012. Initial efforts to remove it proved unsuccessful, leading to a group called the Satanic Temple — who are related more to secular humanism than to Satanism — to apply for a permit to install a statue of Baphomet (the goat-headed deity often used to represent Satan) on state grounds. The group has said that they will withdraw their application should the monument be removed, but with the present opposition, that may not happen.

Meanwhile, the American Atheists have released their own opinions on the topic, and they find this case to be a step in the right direction, a victory for religious neutrality from the government. Amanda Knief, National Legal and Public Policy Director of American Atheists, said, “These monuments are unconstitutional, plain and simple. There is no question. We will fight any attempt to use government resources to advance religion, whether it’s happening in Oklahoma City or Washington D.C.”

American Atheists filed a suit in Levy County, Florida not long after the decision was made to remove the Oklahoma monument, challenging the installation of a Ten Commandments monument at the county courthouse.