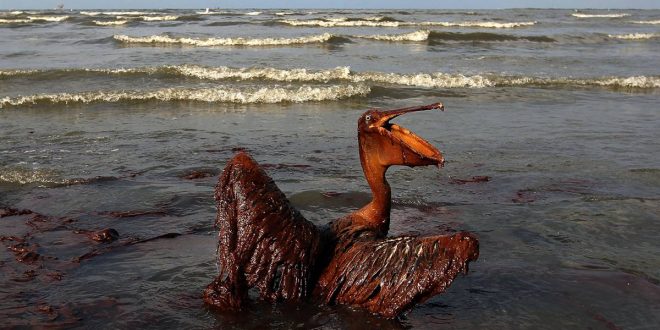 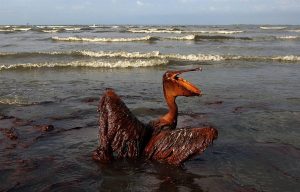 The oil you use for cooking and the oil you use to fill up the engine of your car have a high probability of leaking and flowing into the ocean. Since oil is hydrophobic, it will not dissolve in water. The density of oil is less than water which means that it floats to the surface and sticks to many things, including animals. Oil can weigh down the fur/wings of animals, hindering their functions and ultimately, killing the animals. Baby otters end up drowning because the oil ruins their flippers, and many species of birds now have wings that cannot fly anymore.

One oil spill, called the Exxon Valdez, ended up killing 250,000 seabirds, 2,800 otters, 300 harbor seals, 200 bald eagles, 22 killer whales, and billions of salmon and herring eggs. Not only is the present generation harmed by the oil, but the eggs (the future generation of fish and birds) are also harmed.

Dispersants, skimming, absorption, and the use of oil booms are effective ways to clean up the oil. Dispersants help break the oil into small droplets which makes it easier to clean up. After applying the dispersants, they can skim the water for any excess oil, which makes the cleanup much easier. Skimming is using a machine that skims of the oil off of the surface of the water. Even though dispersants release chemicals into the ocean, it is still the most effective way to clean up an oil spill. Absorption is taking material and absorbing, or sucking away, the oil. The bad side to this is that the absorption also takes away a lot of the water. Lastly, there are oil booms. Oil booms are temporary floating barriers that prevent the oil from reaching land. Booms are usually effective for about a few months.

All of these “solutions” have their negative sides, so it would be much easier to just not have oil spills!

A quote from my sister: “Dear reader, you can help by cutting down on your oil consumption, and remind the ones around you to do so too. Try not to fry food, and don’t use oil in any excessive way because OIL HURTS ANIMALS WHICH ALSO AFFECTS THE HUMAN POPULATION, AND WE WILL END UP HAVING NO MORE WATER AND DIE OF A HORRIBLE DROUGHT!”

Cindy is senior at Henry M. Gunn High School and is incredibly honored to be a part of the Rising Star Magazine team. She enjoys belting out Disney songs, playing piano, watching Chinese dramas, and babysitting. Cindy serves as California DECA's VP of Silicon Valley and is also the singing teacher at FCSN and the President of HEARTS Nonprofit. She can be contacted at cindy@risingstarmagazine.com
Previous ISIS’s Chemical Weapons
Next Leading a Proactive Life