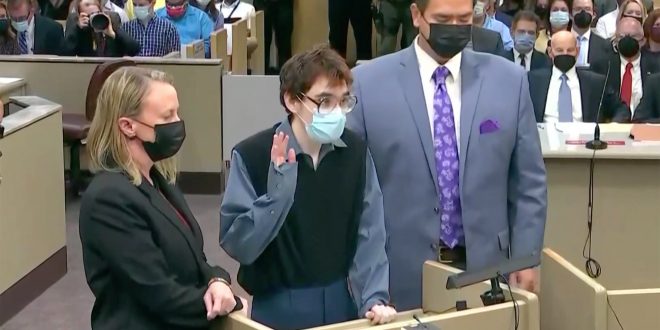 Nikolas Cruz, the gunman who carried out the shooting in February 2018 of students and faculty at Marjory Stone Douglas High School pleaded guilty in a Florida courtroom Wednesday to 17 counts of murder and attempted murder.

The 23-year-old faces a minimum punishment of life in prison and a maximum of the death penalty, which will be decided by jury in the upcoming phase of the trial, in which Cruz will be sentenced. The prosecution has stated that they plan to seek the death penalty.

In court, Cruz was wearing a collared shirt, black vest, a mask, and large glasses He stood at the court lectern and responded to Judge Elizabeth Scherer’s questions with “yes ma’am” or “no ma’am”, and assured the judge “I know what’s going on.” He stated that he had depression and anxiety, and the anxiety was made further severe by the court trial, but he said he was able to proceed.

Cruz responded “guilty” when all of the 34 charges were read to him. Later on, he made a short speech and apologized to the victims.

“I am very sorry for what I did, and I have to live with it every day. If I were to get a second chance, I would do everything in my power to try to help others. I am doing this for you, and I do not care if you do not believe me. And I love you, and I know you don’t believe me, but I have to live with this every day, and it brings me nightmares and I can’t live with myself sometimes, but I try to push through because I know that’s what you guys would want me to do. I hate drugs, and I believe this country would do better if everyone would stop smoking marijuana and doing all these drugs and causing racism and violence out in the streets. I’m sorry, and I can’t even watch TV anymore. And I’m trying my best to maintain my composure, and I just want you to know I’m really sorry, and I hope you give me a chance to try to help others. I believe it’s your decision to decide where I go, and whether I live or die. Not the jury’s. I believe it’s your decision. I’m sorry.”

When asked about whether or not he understood that the jury, and not the victim’s families, would be deciding his sentence, he responded saying he understood.

“What I meant was I believe they should have the right to choose, the victims themselves, on whether I should take life or death.”

Previous How to Plan your Vacation
Next Sports in the Movies: A League of Their Own